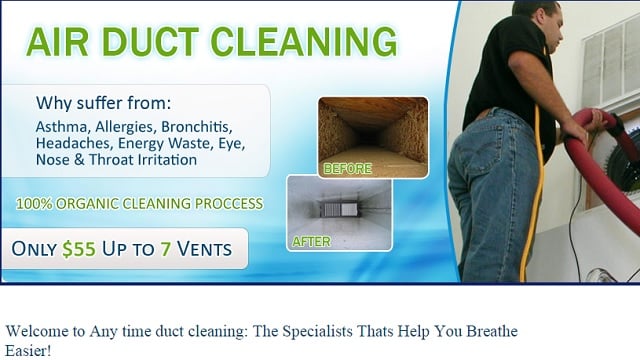 The city of Avondale Estates says it is investigating an “Exploitation of the Elderly” case involving a duct cleaning company that has generated complaints in Georgia and St. Louis.

According to a fraud alert issued by the city, a company doing business as AA Duct Cleaning or Anytime Duct Cleaning is the target of the police inquiry. The company has also generated complaints from other residents, the alert says.

“The company will contact homeowners and use extremely aggressive and misleading claims in order to solicit business,” the city’s alert says. “The company currently has received an ‘F’ rating from the Better Business Bureau of Atlanta. There is also an active investigation, concerning this company, which is being investigated by the Georgia Department of Consumer Protection.”

The BBB recently issued a warning about the company after receiving numerous complaints. The BBB has received a total of 44 complaints about Anytime Duct Cleaning.

“Complaints received allege a ‘bait & switch’ tactic by this company stating duct cleaning could be performed for a ‘special price’ only to be told the work could not be done at that cost,” the BBB reported. “They were then offered an extra deep cleaning for an additional fee. In one instance the consumer alleges the charge was almost 10 times the agreed upon amount.”

“The Missouri Attorney General has filed a civil lawsuit against AAA Anytime Duct Cleaning, its owners, and a St. Louis manager for abusive telemarketing practices and fraud,” the BBB reports. “In addition to hundreds of ‘No Call’ complaints, Missouri consumers have complained to the Attorney General’s Office about abusive practices by Anytime’s telemarketers, including being cursed at or threatened for refusing to purchase the company’s air duct cleaning services.

“The lawsuit also alleges that Anytime engaged in various forms of consumer fraud, including a ‘bait and switch’ scheme in which the company would advertise one price for air duct cleaning services but charge another. In several examples, Anytime advertised a price of $44.95 to clean air ducts, but attempted to charge consumers over $1,000. Consumers stated the company regularly lied to consumers about needing ‘super cleaning’ services which cost thousands of dollars, or the need to install UV lights in their vents to kill mold, when neither service was actually needed.”

While the company was known to be doing business in St. Louis in Georgia, the company’s website says it is “fully bonded, licensed and insured company recognized by the State of Florida.”