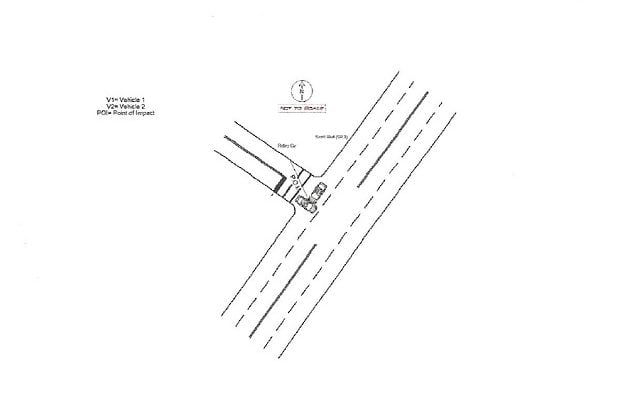 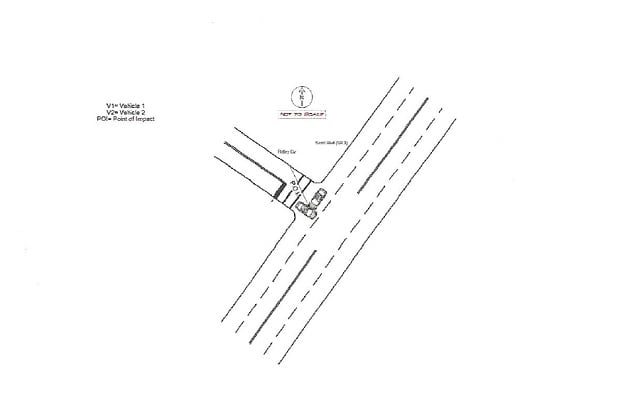 A diagram of the accident contained in a Decatur Police report

Decatur Police have arrested the driver of a Dodge Charger that struck and killed a Lakeside High School teacher on April 25.

“Pedemonte was taken into custody at his residence without incident,” Decatur Police Lt. Jennifer Ross said.

According to police, on April 25, Leah O’Brien was attempting to turn left (from Ridley Circle), eastbound onto Scott Boulevard, and Charger was traveling westbound on Scott Boulevard when it hit O’Brien, who died as the result of her injuries. Her 8-year-old daughter was sent to the hospital in critical condition.

The initial report indicated that O’Brien failed to yield. But Katie Clarke, a witness who contacted Decaturish, said the Charger was driving well over the posted speed limit of 40 miles per hour when it hit O’Brien’s Hyundai Sonata.

“They were going so incredibly fast,” she said.

Ross confirmed that the police investigators believe Pedemonte was speeding that night.

“We have evidence of excessive speed,” she said. Clarke said she and her husband were in a vehicle “two car lengths” behind the Charger when it turned onto Scott Boulevard. When the accident occurred, she was in front of Westchester Elementary.

From Clarke’s point of view, it looked like O’Brien didn’t see the Dodge Charger coming.

Clarke said that the Charger was behind another car in the left lane of Scott Boulevard. She said she was in the right lane.

“They were bearing down on that car,” she said. “Right before they were about to jump over it, they swerved into our lane and shot up in that lane. A couple of seconds later, they hit Leah.”