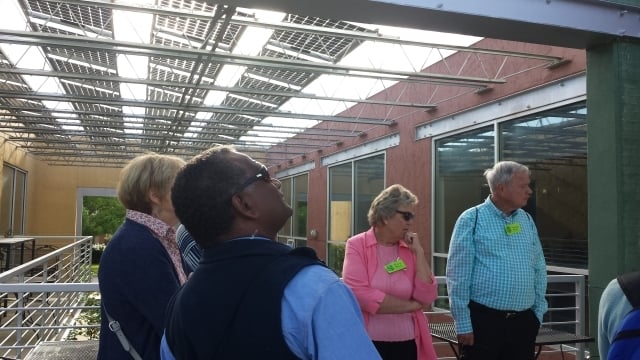 Cliff Bird, a conference attendee from Fiji, looks up at the solar panels at East Decatur Station during a tour that was part of the 2015 Caring for Creation conference. Photo by Dena Mellick
Share

Cliff Bird, a conference attendee from Fiji, looks up at the solar panels at East Decatur Station during a tour Friday. Photo by Dena Mellick.

Christianity and environmentalism are sometimes viewed as being in opposition, but attendees of a weekend conference in Decatur are working to challenge that perception.

Organizer Michael Black said 120 participants from different countries and denominations took part in the eighth annual National United Methodist Church (UMC) Caring for Creation Conference, held at Decatur First United Methodist Church April 24 and 25. It’s the first year the conference has taken place in Decatur, and this year’s focus was on the theme of environmental justice.

“Environmental justice was selected because so much of what the church does is to help ‘the least of these,’ yet very often we respond to communities suffering from immediate environmental disasters rather than helping to build community resilience and reducing the likelihood of future environmental disasters,” said Black, a faculty member of the Neuroscience Institute at Georgia State University and a faculty associate for its Sustainability Office.

Beth Bond, another one of the conference organizers, took participants on a walking tour of Decatur Friday morning, pointing out solar panels on church buildings and businesses. Bond, a managing partner of the environmental news website SoutheastGreen.com, described herself as a “solar geek” to the group, as she rattled off statistics about solar panel efficiency.

Jefferson Knight took part in Bond’s walking tour, saying he hoped to be able to both share and gain knowledge during the conference. Knight traveled to Decatur from Monrovia, Liberia, where he serves as the program director for the Peace with Justice Program. He’s also on the UMC’s Creation Care Ministry Team.

Knight said he felt Christians need to be more concerned about issues of sustainability. “The focus when it comes to the African church is evangelism, salvation, church growth, and all the other things that has to do with spirituality. But the issue of the environment has not been a major issue in general in the church in Africa,” Knight said.

Knight said the recent Ebola outbreak not only had an enormous economic impact in Liberia, but also an environmental one.

“One of those ways in which the environment was affected as a result of the Ebola situation was when people died … the victims, they were taken and buried improperly in communities, and some of them were dumped in rivers that communities were dependent on for livelihood, and it destroyed those waters. Right now people cannot drink from those waters,” Knight said.

John Peterson attended the conference as the Sustainability Representative for the Candler School of Theology at Emory University. Peterson said the church is often viewed as not being concerned with environmental issues.

“I think this speaks a lot to that. … The committee that put this all together is really invested in trying to get the church to pay more attention to what’s going on,” Peterson said.

One question that both ministers and laity asked repeatedly over the weekend was how to demonstrate to people that they can make a difference without making them feel overwhelmed by the sheer volume of environmental needs.

“I think for faith communities, religious communities, food is a richly religious subject as well as a side for fellowship and a place to move into conversation about the environment,” Dr. Ellen Ott Marshall, associate professor of Christian Ethics and Conflict Transformation at Candler, said in Friday’s keynote presentation.

Another presenter told a workshop group that clean energy can begin with a simple air conditioning and heating upgrade in a home or church.

Black said people don’t have to be part of a church to make a difference.

But for the weekend’s conference attendees, the lens of faith is an important way to view sustainability efforts and environmentalism.