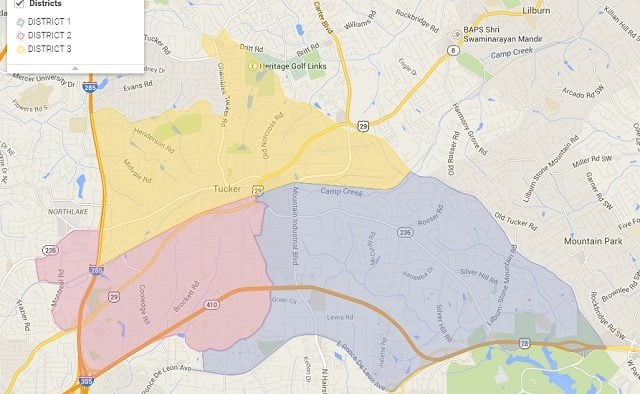 A map of the city of Tucker, approved by voters on Nov. 3
Share

Proposals for the new cities of Tucker and LaVista Hills have passed the General Assembly and will be considered by voters this November.

Meanwhile, several annexation proposals stalled in the Legislature. Decatur’s annexation proposal failed, as did a proposal to annex Druid Hills into the city of Atlanta. Avondale Estates’ proposal was defeated late on Thursday evening, shortly before the approval of the bills for Tucker and LaVista Hills.

LaVista Hills and Tucker had been bogged down in last-minute disputes over the maps of each city. Earlier on Thursday the cities of Tucker and LaVista Hills reached a compromise that would allow a vote on both cities to move forward this evening. Tucker has released the map for Tucker that was approved by a conference committee in the General Assembly.

According to the Atlanta Journal Constitution, under the terms of the deal, “Tucker gets a Wal-Mart, QuikTrip and 500 residents, and LaVista Hills keeps 1,500 residents within its borders.” The area is located southeast of Spaghetti Junction, the AJC says. To read that story, click here.

LaVista Hills posted the following message on its Facebook page.

Off to referendum!!!! Thanks to all for all the hard work!

Take a deep breath, and we are off to November!

YOU DID IT TUCKER COMMUNITY!!!

Congratulations and THANK YOU to the Tucker community – your hard work paid off with the approvaltoday by both the House and the Senate of a bill giving YOU a vote in determining how you choose to be governed locally! When the Governor signs HB515, Tucker citizens within the map boundaries will have the right to vote in November on incorporating a City of Tucker.

Although the map that was approved does not reflect the entirety of the traditional boundaries of the Tucker community because of changes made by Sen. Fran Millar, Tucker remains a solid community that we can all be proud of. We are heartbroken that many of you find yourselves removed from the Tucker map. Remember you will always be a part of the greater Tucker community – city boundaries will never change that.

They said it couldn’t be done – detractors and opponents repeatedly worked against the Tucker community for more than 2 years. But they vastly underestimated your commitment to your hometown. Thank you for demonstrating character by remaining positive and above the fray during very difficult times. Please join Tucker 2015 in moving toward healing the unfortunate rifts created across the entire community.

MUCH WORK TO BE DONE

We haven’t crossed the finish line yet – there remains a tremendous amount of work to be done between now and the referendum to educate neighbors and friends about the benefits of cityhood for Tucker. Look for information soon about how YOU can help determine Tucker’s future. Until then, spend quality time with family and friends during Easter and Passover.