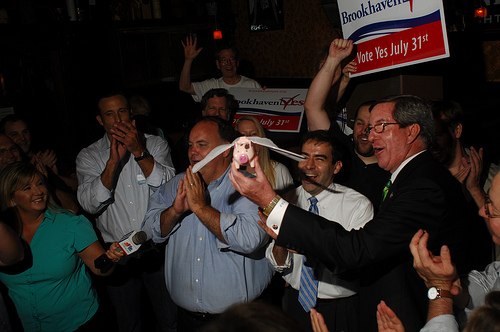 I’ve attended the birth of one city.

Back in 2012, I was working at Reporter Newspapers when Brookhaven came into this world flailing its grabby hands in the direction of some choice commercial property that wasn’t in its original map. I was there when the first city council was elected. I was there when it paved the road with its good intentions, creating a path leading toward unnecessary entanglements with the Pink Pony, a local strip club, and the city of Chamblee.

But I was also there when its police force began patrolling the streets. I saw a council that, while not always totally transparent, was at least responsive to its citizens. Whether you liked the response was a different matter. The owners of Century Center and Executive Park went willingly into Brookhaven because they could. The way you spend your dollar speaks volumes, provided you have a lot of dollars.

The tendency of news publishers is to put the name of a city on a masthead and try to make money off it somehow. I’ve been asked about creating an Atlantaish, for example.

You’ll probably see a publication that will have Tucker and LaVista Hills in its name soon.

Maybe that’s foresight, but I’ve noticed some publications, particularly smaller ones, fall into the habit of becoming boosters for the cities in their mastheads. Then you have to somehow spin the bad news in a positive way, or ignore it all together. I can’t make excuses for anybody. That’s why I never went into public relations.

So I won’t be doing a LaVista Hillsish, or a Tuckerish, though I’m sure there’s some incentive to do so. Reporter Newspapers did an admirable job of making sure its masthead didn’t become a badge showing allegiance to a cause. I’d like to do the same.

I’m not really into the whole “Rah rah” thing.

I’m not for the new cities of LaVista Hills and Tucker. I’m not against them either. I’ve seen the good and the bad of the smaller government embodied by metro Atlanta’s new cities.

Sandy Springs is at times refreshingly innovative, even if the city leaders can be surprisingly heavy-handed. They wield the threat of eminent domain like a cowboy toting a six shooter. A city councilman once told me, “New cities are like neighborhood associations with guns.”

Dunwoody is just one of the nuttiest damn places I’ve ever covered. The meetings went on for a Biblical amount of time. A mysterious, Tea Party-esque political group crashed meetings of the city’s advisory board on revising the Dunwoody’s charter and ranted about George Washington. Conspiracy theories alleging various outlandish wrongdoings by public officials abounded. There were probably some minor wrongdoings to be sure, but it isn’t major until one of your elected officials appears in a booking photo.

Speaking of DeKalb County, let’s not forget why we’re having this cityhood discussion. County government is so laughably corrupt that it spends time arguing about who the hell it’s supposed to police it. Some future county CEO will make a campaign pledge to reduce corruption in DeKalb County government by 60 percent.

By then it won’t matter. If DeKalb County isn’t totally incorporated in the next few years, it will be a travesty. You’d be leaving everyone else to bear the brunt of what passes for government. Who will pay the additional taxes to keep it running so inefficiently? That’d be any person who didn’t have the good fortune of waking up and finding themselves in the map for a new city.

We don’t need more engaged citizens to protect ourselves from DeKalb’s excesses. We need lobbyists. Tucker and LaVista Hills benefited from being well established in the current cityhood process. They got away with bending the rules for forming cities simply because legislators were tired of dealing with them. If the proposed cities of Stonecrest and Greenhaven become a similar annoyance, that itch will get scratched, too.

If voters approve these new cities, it won’t mean they’ll get better government, though. It means they’ll get government in their neighborhood instead of in their county commission district. I’m not complaining. It’s all gravy for me, because it gives me stuff to write about. The cityhood thing is like a gift to journalists and political consultants. As they say at the Pink Pony in Brookhaven, “Make it rain.”

But what’s good for me isn’t necessarily good for you. You’ve got to decide if you’re willing to accept a city that isn’t going to be perfect to stick with a county that’s hemorrhaging credibility. You can’t go into it thinking it’s the solution to everything, because it isn’t.

The only way to secure good government is to demand good government. Then you settle for the best deal that you can get. That’s the bland fruit of democracy.

Maybe you think you’ll get a better deal with the county because you figure if it hasn’t hit rock bottom already, it’ll hit it soon enough. Then it will have nowhere to go but up. That’s not a bad plan.

Neither is getting while the getting is good.