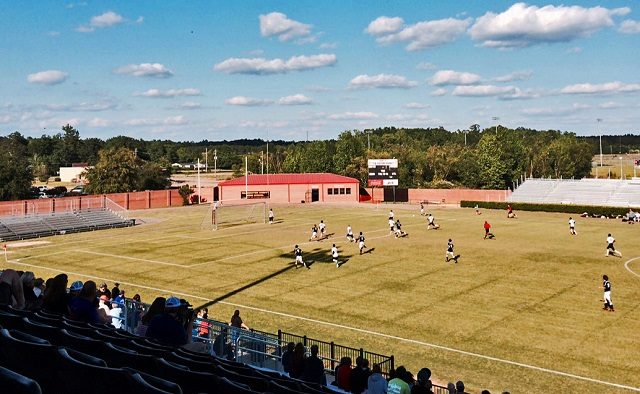 Photo Courtesy of Be Active Decatur

The Decatur High School boys and girls soccer teams have kicked their way into the 2nd round of the state playoffs.

Both crushed their playoff opponents, triggering a “mercy rule” that ended the games before the scores got out of hand.

The girls team, which has seven freshmen starters, beat the Glen Hills Spartans in Augusta, Ga 10-1. On Tuesday, they beat Central High in Carrollton 11-1. A commenter on the Decaturish Facebook page reports the girls soccer team will play their next game a Savannah Arts Academy at 4:40 pm on Friday afternoon, May 8.

The boys team will play Wednesday, May 6, at 5:30 pm against Sonoraville High School, according to DHS.

According to Michael Harbin, a Decatur resident and team supporter, the boys team played Washington County last Friday and won 11-1. According to Decatur High, the score triggered the “mercy rule” and was “the only mercy rule game in all of the first round of the AAA playoffs.”

“These are your neighbors’ boys,” Harbin wrote on the city’s Be Active Decatur blog. “Tickets are $7. Come out, watch a good soccer match and support our Bulldogs boys to another victory and one more step towards the State Championship.”