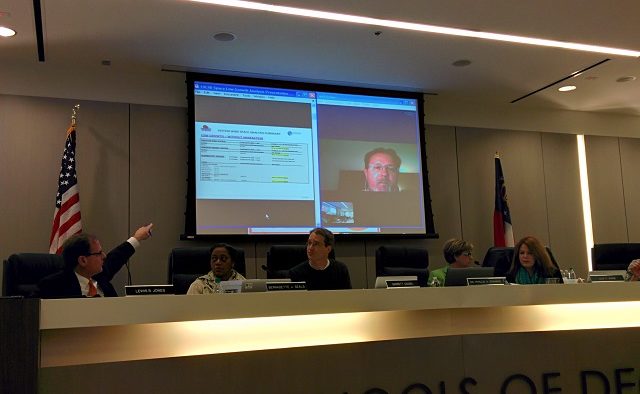 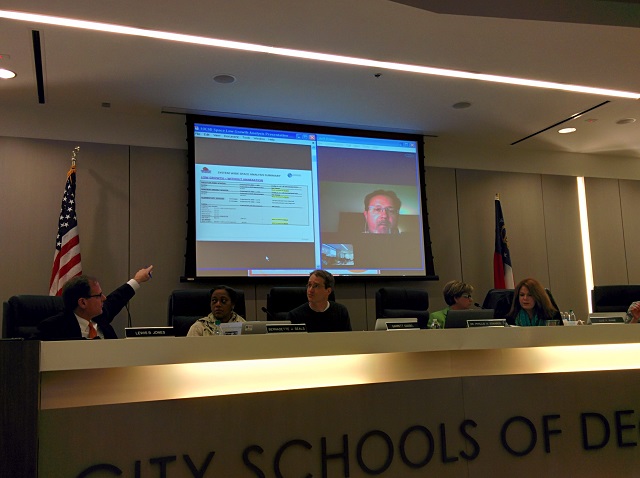 School Board members listen to a presentation by consultant Jeff Prine. during their Feb. 23 meeting. File Photo by Dan Whisenhunt

The Decatur School Board on May 12 voted to officially ask the City Commission to put a $75 million bond referendum on the ballot this November.

The bonds would pay for school construction to meet the system’s growing enrollment needs. Current City Schools of Decatur enrollment is 4,300 students. CSD consultants project it will be more than 6,000 by 2020.

City Commissioners would have to vote to place the issue on the ballot. If voters approve the request, it will increase property taxes by about 8 percent. According to an example provided by CSD, it would raise taxes on a $500,000 home by $680 per year.

CSD is also seeking public input on selecting a superintendent to replace outgoing Superintendent Phyllis Edwards. The School Board recently hired Hazard, Young, Attea & Associates to conduct the search. Edwards announced her resignation in March and said she plans to move back to her home state of Florida. She was hired as City Schools of Decatur’s superintendent in 2003.

Courtney Burnett, a spokesperson for the school system, told Decaturish that the School Board is conducting a survey of the community as it searches for candidates.

To take the survey, go to this link: www.ecrasurvey.com/Decatur

The School Board also set the dates for community forums about the next superintendent. The forums will be held at the Beacon Municipal Center, located at 125 Electric Avenue in Decatur.

The forum dates are …