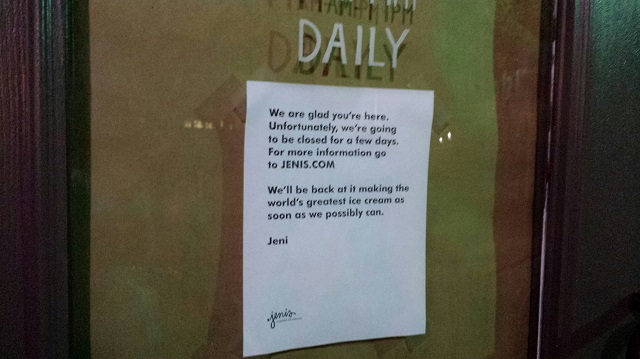 Sign on the door of Jeni’s in Decatur. Photo by Dena Mellick

Your favorite ice cream shop will be scooping up delicious treats soon after a nearly month-long hiatus due to a Listeria outbreak. Jeni’s Splendid Ice Creams says its Atlanta shops, including Decatur’s, will open at 7 pm on May 22, in time for Memorial Day weekend.

“The Jeni’s kitchen team was back at it this morning, making caramel from scratch in preparation for a run of Salty Caramel ice cream. On the schedule for tomorrow: steeping Intelligentsia Black Cat espresso beans in cream and grass-grazed Ohio milk,” a press release from the company says. “When the shops open, the dipping cabinets will feature Salty Caramel and other signature flavors, throwbacks such as Root Beer, and the new, limited-edition ice cream, Sun-Popped Corn. Additional flavors will be added in the coming weeks as the kitchen returns to full production and the summer progresses.”

The company says that it has outsourced production of the company’s ice cream to another dairy in Orrville, Ohio to meet up with the demand.

“In order to have a consistent supply once pints are available, sales in grocery stores and online at jenis.com will resume later this summer,” the company’s press release says.

Jeni’s estimates its recalls and cleanup due to the Listeria outbreak cost the company $2.5 million. In the interim, Jeni’s made some provisions to provide partial pay to its employees who were idle while the stores were closed.

The company provided lengthy press releases throughout the ordeal, including a release documenting where the company found the source of the deadly bacteria.

Listeria can cause infections in children and adults. It’s also a threat to people with weak immune systems. It has been known to cause stillbirths and miscarriages. A Listeria-outbreak in Blue Bell Ice Cream products killed three people, according to the CDC.