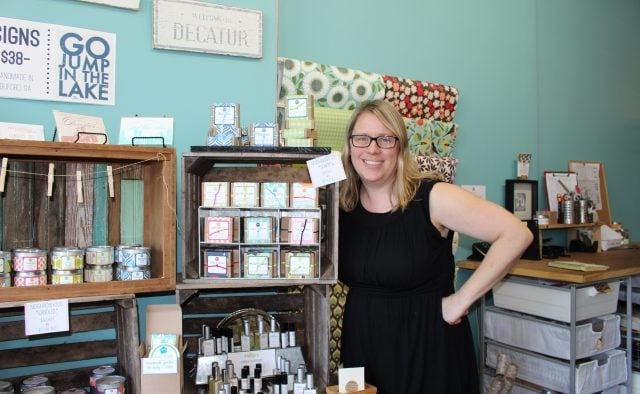 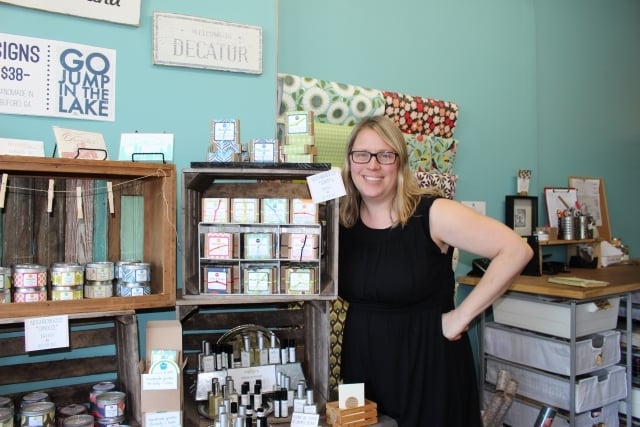 Are people who live in the same neighborhood attracted to similar scents?

That question is what led Mama Bath + Body owner Emilie Sennebogen Bryant to come up with specific scents to represent individual Atlanta neighborhoods.

Before opening her Avondale Estates business, Sennebogen Bryant sold her candles, soaps, and lotions at the many festivals around Atlanta. “We started doing festivals right around when we moved here, like 2006, 2007. And I noticed that certain scents sold better in certain neighborhoods,” she said. “It was just kind of an interesting sociological observation. And I started to think that was kind of a neat idea that people that live in neighborhoods had similar olfactory likes.”

“I was ready to discontinue the peppermint rosemary scent because it just wasn’t selling. I’d repackaged it a few times … and then I did the East Atlanta Strut, and that was our best seller. That was the first one that kind of gave me the idea.”

So she started creating a few neighborhood branded soaps and candles, assigning some fragrances that already existed and creating new concoctions for others.

Her “Harmony” fragrance of lemongrass and lavender does double duty as the scent of Decatur, while the “Calming” scent of lavender and geranium represents Virginia Highland.

Kirkwood is a bright scent of grapefruit, tangerine, and lavender. “It’s a very fresh, citrusy scent,” Sennebogen Bryant said. “We gave Cabbagetown lavender, tea tree, and clary sage. Cabbagetown is kind of funky. It’s kind of a fun, funky scent. And then we had a rose geranium scent that made me think of Inman Park because it was kind of upscale and all the beautiful gardens.

“The most important one which is Little 5 Points. That is one that I actually developed the scent for the neighborhood because it was patchouli. Obviously.” 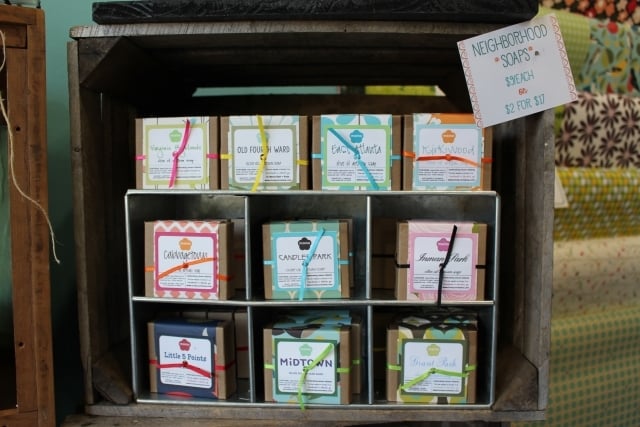 A few of the neighborhood soaps at Mama Bath + Body in Avondale Estates. Photo by Dena Mellick

Sennebogen Bryant said she wasn’t sure if people would get her idea, but the neighborhood smells have attracted a following.

“I remember thinking, gosh this could be really risky, because people may not get it, but people love it,” she said. “People love their neighborhoods in Atlanta. It’s a big part of Atlanta living; you really associate yourself with your neighborhood. It’s kind of an extension of your personality … for some people.”

Now there are about 15 neighborhoods represented through her soy candles and natural soaps, all made using essential oils. And the owner of Mama said she spent a long time making sure she was not only appealing to the sense of smell, but also to people’s sense of sight through the packaging.

“The paper and the fonts were what really embodied the neighborhoods,” Sennebogen Bryant said. Describing the fonts, she explained, “The one I used for Avondale estates is very kind of old European village, which is what Avondale was modeled after. And then the one for Candler Park is arts and crafts.”

So do customers ever complain about the fragrance chosen for their neighborhood?

“Yes, there’s a lot of pushback. People take this very seriously, this neighborhood thing. People get more upset if their neighborhood is not represented,” she said.

She said that’s how Atlanta was given the scent of honey almond – the only “foodie” fragrance and a favorite among customers.

“We gave Atlanta our most popular scent because I figured that would at least make the people happy [whose neighborhoods] aren’t being represented. That’s why Atlanta got honey almond.”

And if you really want to have a say, the Mama owner said you can work with the shop to create your own custom scent of candles and soaps.

Sennebogen Bryant started Mama Bath + Body in 2002 while living in Los Angeles. She said she got serious about the business in 2009, and that’s when she opened a store in Decatur.

The business moved to Avondale Estates last year and there is also a shop in the new Krog Street Market.

She said the two business locations are doing well.

Sennebogen Bryant and her staff create all of the Mama Bath + Body products in a work space in the back of the Avondale store.

So what is her favorite scent? Even Sennebogen Bryant has a difficult time settling on one.

“My favorite, I think is East Atlanta. I’ve always been the peppermint rosemary girl,” she said, before amending that thought. “Actually, you know what – it’s Midtown because lavender and rosemary is my favorite.” 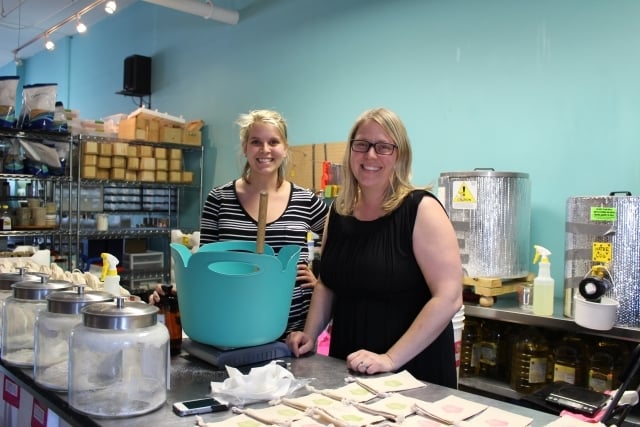