Left to right: My mother-in-law, my wife and my baby boy, J.P.
Share Left to right: My mother-in-law, my wife and my baby boy, J.P.

We were on I-85 South, headed toward Montgomery, Ala. on the second stretch of the Tour de Baby. My infant son, J.P., was in the car seat and I was sitting next to him in the back seat. My wife was driving our red Ford Focus and my mother-in-law was riding shotgun.

Two 18-wheelers were in front of us. One was a Sam Fleet truck, owned by a small trucking company based in Alabama. The other was a fuel tanker. Both rode side by side, occupying the right and left lanes for a good five miles.  A line of cars stretched behind them.

“So stupid,” my mother-in-law said.

“Ugh,” my wife said, riding behind the Sam Fleet truck occupying the left lane. “He needs to get over and let these people pass.”

As we approached the Kia plant, a car behind us broke ranks. The driver scooted up the wide mouth of the dedicated turn lane and passed the tanker truck on the narrowing shoulder of the right side of the road.

“Stupid,” My mother-in-law said again. “People are so entitled. It’s all about me, me, me.”

“Ugh,” my wife said. “People think their time is more important than everyone else’s. So dangerous.”

I put my hand on J.P.’s stomach to see if he was still breathing. I do this often. J.P. let out a slow, deep breath from his car seat.

The Sam Fleet truck accelerated and lurched forward to pass the tanker truck.

“Go on ahead and get past this idiot,” My mother-in-law said.

My wife stepped on the gas after the Sam truck had moved into the other lane. Right around that time, another silvery car behind us broke ranks and shot up the right shoulder of the road to pass the tanker and the truck that had just moved in front of it.

As our red Focus got about halfway up the side of the Sam Fleet truck, the driver switched on its flashing yellow turn signal 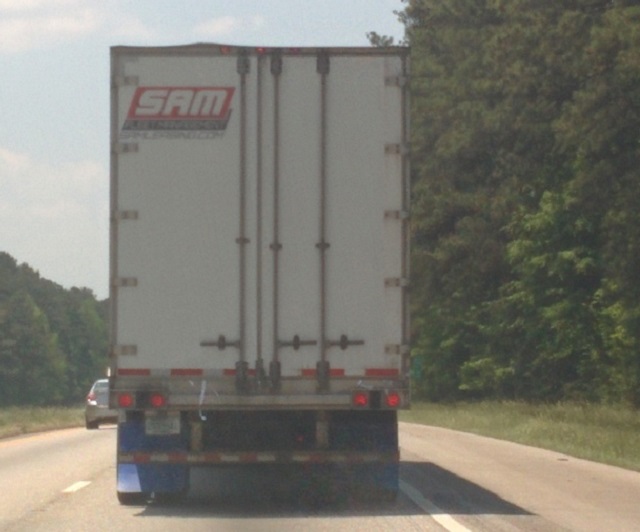 The Sam Fleet truck that nearly killed us. Jerk ass.

My wife gasped as the Sam Fleet truck started taking over our lane like our Focus wasn’t even there.

My wife took a breath. She looked to the grassy median on the left and slowed down as drove the Focus onto it, the green blades folding beneath us like a rolling blanket.

“Ahh, Gahh,” I yelled, my hand on J.P.’s stomach, a defensive maneuver as useful as pulling the parking brake on an interstate.

“That f$&!er,” my mother-in-law yelled. J.P. opened his eyes for the first time. His tiny eyeballs scanned the back of the car. He squirmed a bit in his seat.

The Focus came to a gentle stop on the grassy I-85 median. None of the cars behind us that saw what happened even bothered to slow down.

“Holy …,” I said, trailing off as the engine puttered on the median.

My wife closed her eyes and slumped back in the driver’s seat. “We’re just going to wait here for a minute,” she said before looking up and asking, “Is the baby ok?”

J.P. had closed his eyes again, his round baby head nestled into the seat.

“Yeah. He woke up for a second,” I reported from the back seat. “He’s fine though. He’s asleep.”

After we caught our breath, and I outlined a plan to beat the Sam Fleet truck driver with my flip flops, we found a gap in the traffic and eased back out onto I-85.

My mother-in-law patted my wife on the shoulder. “You did so good, baby girl. I’m so proud of you.”

My wife later said when the truck started moving into our lane, it was like a switch had flipped, muting the curse-screaming of her mother and my useless advice. She told me she was thinking, “The baby’s on that side. The baby’s on that side.” She scanned the median for obstacles, pulled off and prayed the car wouldn’t roll over.

It was be the second time she saved our baby’s life. The first was the emergency C-section.

“It just wasn’t our time,” my mother-in-law concluded.

J.P. slept the rest of the way to Montgomery.