Decaturish.com has also taken the unusual step of filing a complaint with the state Attorney General’s Office over City Schools of Decatur’s refusal to turn over a sales agreement related to 3.9 acres along Talley Street and South Columbia Drive.

CSD’s attorneys say the system is not legally obligated to turn over the agreement until the purchase is completed or the sale is terminated. The estimated closing date for the property is March 1, 2016, after a November bond referendum that would allow the school system to borrow money to pay for school construction.

“The Open Records Act provides that real estate appraisals, engineering or feasibility estimates, or other records made by or for the agency relative to the acquisition may be withheld from disclosure until such time as the property has been acquired or the proposed transaction has been terminated or abandoned,” school system spokesperson Courtney Burnett said. “The purchase and sale agreement was obviously prepared for the Board relative to the acquisition.”

The rationale provided by School Board members is that sensitive information in the sales agreement could scuttle the deal.

But as Decaturish pointed out to the Attorney General’s Office, the school system already has disclosed several pieces of sensitive information about the transaction to the public and the media. CSD has named the seller, the locations of the parcels it’s considering and the purchase price. In addition, School Board attorney Bob Wilson has also disclosed two other sensitive pieces of information to the Atlanta Journal Constitution: potential environmental issues with the property and a contingency in the contract involving the November bond referendum. Wilson told the AJC that the purchase hinges on voters’ approval of the bond referendum that would allow the school system to borrow $75 million for school construction. If approved, it will also raise the city’s tax rates by 8 percent to pay off the debt.

Decaturish interviewed the property’s seller, Chuck Bosserman, to learn a little bit more about the land CSD is interested in purchasing. He said he’s unaware of anything in the sales agreement that could hinder his ability to sell the property or that would thwart the deal if it the agreement became public.

“Not that I know of,” Bosserman said.  “… It’s a pretty straightforward contract. [It says] this price is OK. If you guys want to pay it, that’s fine. If you don’t, then you won’t.” 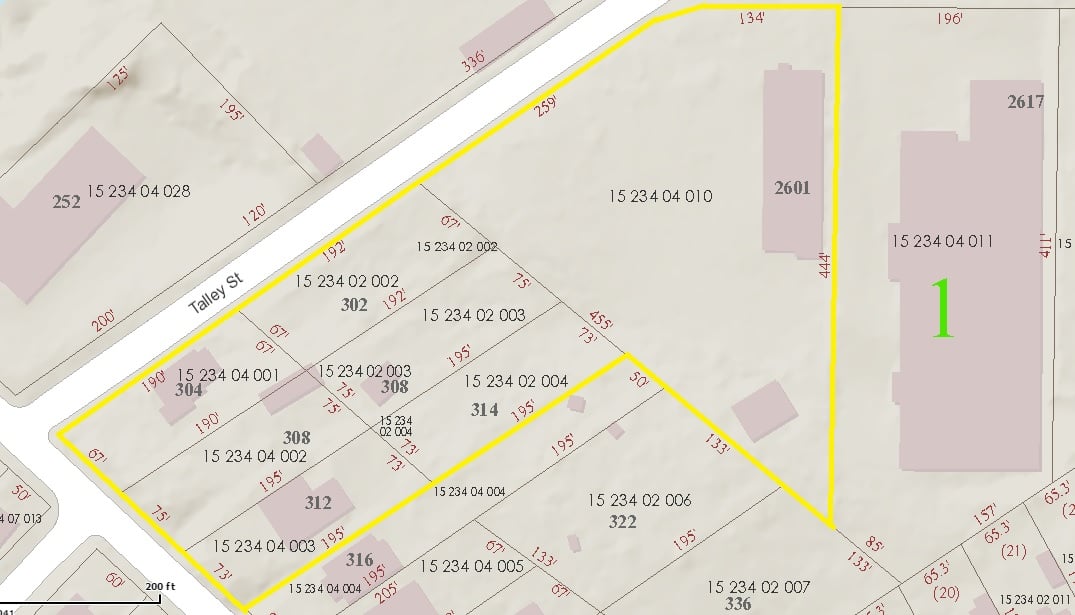 Parcels being sought by the City Schools of Decatur Board of Education. Image obtained from the DeKalb County Georgia property appraisal website, with editing by Decaturish.com to show the specific parcels.

Secrecy surrounding a real estate purchase by a government entity is not unusual. For weeks, Decatur’s School Board has held closed-door meetings, known as executive sessions, to discuss the purchase of property for a new school. On June 9, School Board members held another executive session, but it wasn’t clear that they’d be taking any action afterward. Around 1 am on June 10, School Board members voted to go under contract to buy property along Talley Street and Columbia Drive from Bosserman. The purchase price is $1.25 million an acre, according to the school system. The school system has provided $20,000 in earnest money.

The School Board’s action went unannounced for more than a week until the AJC published a short article about it on June 15. The School Board’s secrecy surrounding the decision to go under contract drew a sharp rebuke from the Georgia First Amendment Foundation, the state chapter of the Society of Professional Journalists, and the Transparency Project of Georgia. (Full disclosure: Decaturish Editor and Publisher Dan Whisenhunt serves on the board of directors for the Georgia chapter of the Society of Professional Journalists.)

Hyde Post, Founding President of the Georgia First Amendment Foundation, said, “The open meetings law allows for closed session in only very limited instances and only infrequently. Routine use of executive session and other mechanisms to circumvent public access is troubling and undermines the purpose and the spirit of the open meetings law.”

Sharon Dunten, president of Georgia SPJ, said the School Board should release the sales agreement in the interest of transparency.

“As you well know, fulfilling the request for these public records is an easy task and if the City Schools of Decatur Board of Education has nothing to hide, copies of these requested records should be given to Decaturish.com,” Dunten said. “I recommend public information requested from the School Board be promptly given in regard to decisions that will affect the community of Decatur.”

Jim Zachary, director of the Transparency Project of Georgia, said there’s no compelling reason why the School Board should withhold the sales contract from public inspection.

“Since the transaction was approved in an open public meeting, there is no reason why the contract should be sealed,” Zachary said. “Public officials with nothing to hide should not hide the public’s business.”

Read more: A letter from the state Attorney General’s Office to CSD attorney Bob Wilson notifying him of a complaint filed by Decaturish.com regarding an open records request.