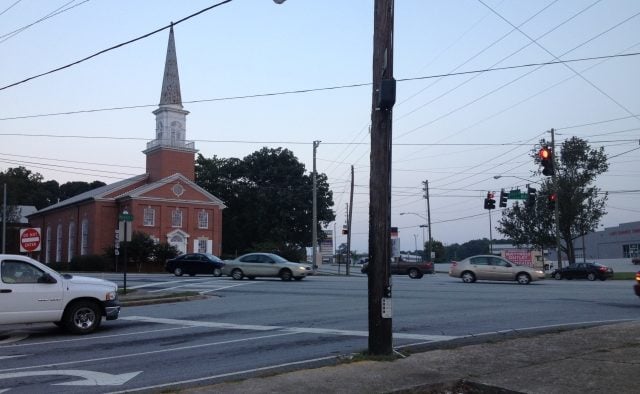 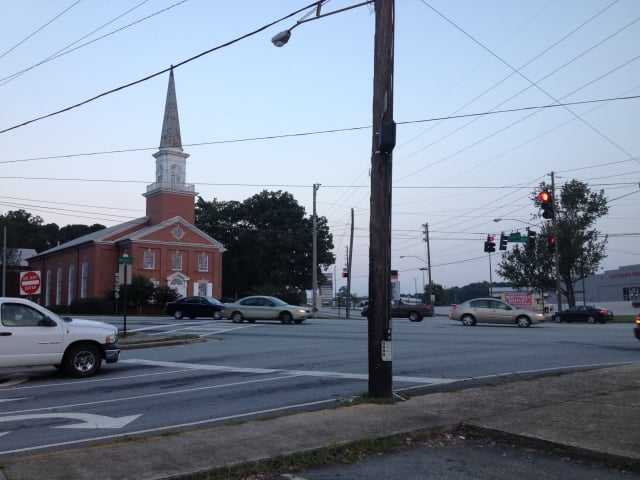 Part of Decatur Crossing will be built on the site of Scott Boulevard Baptist Church. File photo by Joe Avary.

The DeKalb County Board of Commissioners approved rezoning requests Tuesday for Phase II of the Decatur Crossing development, according to the Medlock Area Neighborhood Association (MANA).

Last month, Fuqua had presented its plans to the Board of Commissioners, but a vote on it was deferred until this week’s meeting. A previous MANA post explained, “MANA representatives spoke to support a deferral, as the Cross-Neighborhoods Committee continues to negotiate with Fuqua for improvements to pedestrian safety and access and alternatives that will help modulate cut-through traffic through our neighborhoods.”

But it appeared a compromise had been agreed upon. An update on MANA Wednesday said:

On Tuesday, June 23, the Board of Commissioners approved Fuqua’s rezoning request for Phase II. MANA and the Cross-Neighborhoods Committee were able to come to terms to support the project. We will post more information, including the agreed-upon conditions and private agreement soon. Demolition of the former Scott Boulevard Baptist Church began yesterday.

Fuqua had submitted four requests for the development on Scott Boulevard and North Decatur Road, according to MANA and the BOC agenda. The requests were:

1. Change the land use designation from SUB(Suburban) to TC (Town Center);
2. Rezone property from O‐I (Office‐Institutional) and R‐75 (Single‐Family Residential to OCR (Office‐Commercial‐Residential), for a mixed‐use development with 95,000 square feet of retail,restaurant, and office space and 450 multifamily residential units;
3. Increase the height of multifamily residential buildings in a mixed use development from the allowed maximum of two stories to five stories;to allow two drive‐through lanes for two commercial buildings; and
4. Allow a drive‐through restaurant

The developer said Phase II will begin about eight months after Phase I starts. That part of the development, planned for the front corner of North Decatur and Scott, will include 250 apartments and a few thousand feet of retail space.

Den Webb, Land Use Attorney for Smith, Gambrell & Russell, presented those plans in March and told meeting attendees then that the church would be demolished any day. Earlier this month, Decaturish asked Webb about the delay on the church demolition and the commission’s deferral. Webb said in an email that he did not know why there was a holdup on the church demolition. He also said Fuqua was certain the deferred application would be approved on June 23.

Walkability and increased traffic were some of the concerns cited by attendees at the March community meeting.