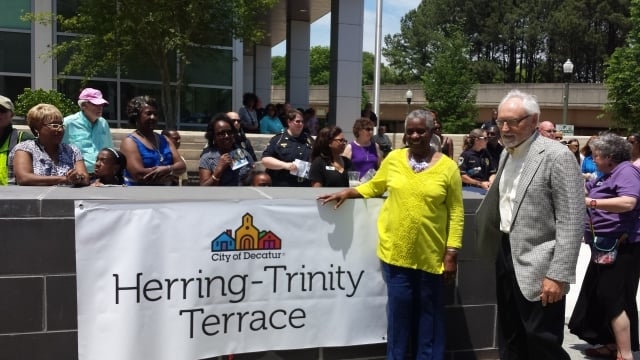 Former Decatur Mayor Elizabeth Wilson told City Commissioners that if taxes keep going up she’ll no longer be able to afford to live in the city.

Wilson showed up to the June 15 City Commission meeting with other seniors who said the same thing. The seniors said they played a vital role in turning Decatur into what it has become, but now they are struggling to remain in the city they’ve called home for decades.

Commissioners adopted a millage rate of 12, reduced by 1 mill from the present millage rate. That’s still technically a tax increase. Wilson and other seniors were concerned about tax bills they’d received in the mail. Total property values in Decatur are projected to grow by 20 percent over last year.

“We have worked hard over the years with the schools, with the recreation parks department and never once did we think that we would be faced with the possibility of losing our homes because we cannot afford to continue to pay the high taxes,” Wilson said.

Wilson and other seniors asked Decatur to cap the millage rate for elderly residents, most of whom are on a fixed income. Some of the homeowners who showed up made their comments from their chairs in the audience because it was a struggle to walk to the podium in front of the commission dais.

“Buckhead came to Decatur. Decatur didn’t go to Buckhead,” one resident told commissioners. “The houses we grew up in, they haven’t changed.”

Seniors are also faced with the prospect of a $75 million bond referendum that’s on the ballot this November. That bond, if approved, would pay for school construction and raise property tax rates by 8 percent.

Commissioners said they have limited ability to reduce the tax rates for seniors. Mayor Jim Baskett noted that the city tried to get the state Legislature to expand the city’s homestead tax exemption this year, but that effort failed.

“Those homestead exemptions would’ve essentially wiped out city taxes for anyone over 65 in the city of Decatur whose home value was $250,000 or less and even if your home is more than that it would’ve made a tremendous reduction in your taxes,” Baskett said. “We had worked hard on it and it was our attempt to deal with this issue.”

“We ask you come to someone in the tax office and speak with any of the revenue staff and we’ll set up a payment plan and at that point you agree to make smaller payments,” she said.  “It allows you to go past the due date.”

Wilson said she would be paying her tax bill late this year, because she will not be able to afford to pay it at once.

“I’m a late payer of my taxes because I have to find the resources because $200 plus extra was not in my budget,” she said.