Indoor cycling and TRX studio to open in Decatur

Indoor cycling and TRX studio to open in Decatur Laura Wheeler and Emily Kinley stand in what will be the TRX room of Pace23, a boutique cycling and TRX studio opening in Decatur. Photo by Dena Mellick
Share 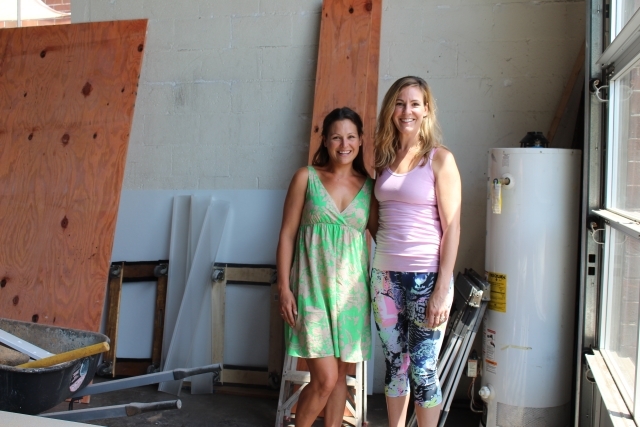 Laura Wheeler and Emily Kinley stand in what will be the TRX room of Pace23, a boutique cycling and TRX studio opening in Decatur. Photo by Dena Mellick

An indoor cycling studio is opening in Decatur this summer, and the owners say it will be much more than just a gym.

Kinley taught spin at the East Lake YMCA and Wheeler led spin classes at the Decatur YMCA. It was their clients who encouraged them to meet and open a spin studio together.

“We were brought together by clients, and … September will be a year since we started really working at it, and getting our ducks in a row and finding a location,” Wheeler said.

The studio, located on 138 New Street in Decatur, will open in July for a select group of early supporters. The Grand Opening is set for August 8.

Those early supporters have showed up through an Indiegogo campaign. Kinley and Wheeler are offering discounted workout packages and perks. Donors to the campaign, which goes into July, will get to take classes and give feedback before the studio officially opens to the public.

Kinley and Wheeler said they were stunned to make their $10,000 goal in less than 48 hours.

Clients aren’t the only ones who noticed something special about Kinley and Wheeler. When the partners met and decided to open the studio together, they noticed a lot of similarities and strange coincidences, including with the number that ended up in the studio name.

“The name, Pace – obviously pace has a lot to do with cycling,” Kinley said. “We also have modeled our whole business after Decatur and the community, and just the pace of Decatur in general, we really love. And we knew we wanted a number. Laura’s a numbers person.”

“Twenty-three is a very unique number,” Wheeler said. “We have 23 bikes. That’s how many will fit comfortably in that space. And then it gets really weird.”

Kinley said, “As soon as we chose the number 23, we realized if you add our children’s ages up, it’s 23. Twenty-three bikes for the studio was the magic number. We realized that we live .23 miles from each other. Laura’s house is 2.3 miles from the studio.”

The women also discovered their childhood homes are 23 miles apart.

“We learned that it takes 23 seconds for blood to circulate through the body,” Wheeler added.

Kinley said she was attracted to indoor cycling about five years ago while training for her first half Ironman, which is a triathlon race. She recently became certified to teach TRX.

Wheeler started training to do TRX in 2012. TRX, she explains, was started by a Navy SEAL on a ship who wanted to be able to strength train. He created a workout system using straps and gravity. “He figured out ways to do every single body part workout with that one single strap. Chest, shoulder, legs, glutes, everything,” Wheeler said.

The partners say their spin classes are modeled after SoulCycle and Flywheel classes.

“We’ve taken what we love about both of those studios and putting our own ‘spin’ on it. We’re putting a Decatur ‘spin’ on it,” Kinley said.

The bike studio will feel more like a theatre, darkened, with LED lighting.

“Things like yoga and pilates have always thrived in these smaller boutique studios because there’s a focus on it,” Kinley explained. “Now that is happening with indoor cycling across the country and what people are doing really well is they are taking that focus and putting it into these theatre-style studios where you can immerse yourself in the lights and the energy and the music so that you really get in that zone.”

“When I’m watching a movie at home, I’m doing laundry, I’m walking around, but when I’m at a movie theatre, I’m focused on what’s going on,” Wheeler said of the experience.

The two say want their spin classes to be an experience and a “rush” that people can enjoy at any level of training.

Wheeler and Kinley say they’ve already receives lots of support and encouragement from the city of Decatur and other Decatur businesses.

“I’ve been really surprised at how much the local business community is supporting us and really wants us to succeed,” Wheeler said.

Pace23 is one of several fitness studios that have opened in Decatur this year. Pure Barre, which has classes based around the ballet barre, opened in May. And Solstice Urban Retreat, a yoga, pilates, and barre studio that offers babysitting, opened in Decatur in April.

Decaturish asked Assistant City Manager Lyn Menne about the recent influx of workout studios in the city. “I think it is a reflection of an increase in younger residents who enjoy a variety of fitness options and an anticipation of an increase in younger residents attracted by the construction of the first new apartments we have seen in Decatur since 1999,” Menne said in an email.

Kinley and Wheeler are hoping to meet a demand in the market with Pace23.

“There are a lot of fitness studios here. A lot,” Kinley said. “There’s not indoor cycling, and there’s not even a specific studio for focused cardio. We’re Decatur residents, so that was a no-brainer. It’s the perfect thing for Decatur because of that intimate environment where you can build a community.”