Group meetings are not public, a strategy the city claims has worked in the development of other strategic plans. Some of the participants are also residents who have complained about being racially profiled by police officers, but the focus groups weren’t specifically created to address those concerns.

The strategy is in line with the city’s indirect approach to the hot-button issue.

Officers have faced accusations of racial profiling by residents, most notably former School Board member Don Denard. Rather than address those concerns on their own merits, last year the city awarded a $25,000 contract to a consultant to facilitate a community-wide discussion about diversity and to help develop a “Community Action Plan.”

Like the diversity discussion, the Police Department’s current strategic planning effort also involves the use of a paid consultant who received a no-bid contract. The city is not required to bid out contracts for professional services.

The city has allocated $15,000 to hire Organizations by Design to conduct private focus groups that will provide feedback on the Police Department’s operations. The group’s principals are Frank and Alysin Foster.

“The Fosters are well-respected facilitators who have a background in organizational strategic planning, including working with law enforcement agencies,” City Manager Peggy Merriss said.

Merriss said Organizations by Design is not affiliated with Art of Community, the firm that received the $25,000 contract for the diversity discussion.

“Organization by Design is not part of the Art of Community contract and the Police Department strategic plan is an effort independent of the Community Action Plan, although they may be complimentary and there is likely to be some overlap,” Merriss said.

She said that while the department has developed strategic plans in prior years, this year Chief Mike Booker made the decision to gather a broader range of input.

“The current effort in the Police Department follows a long-standing practice of having departmental strategic plans and as Chief Booker approached a new planning cycle, he recognized that in the City of Decatur, soliciting community input would only serve to improve the Department’s management, operations, and interactions with the community,” she said.

The seven focus groups are:

– Members of the Leadership Circle, a group that includes Decatur Police Chief Mike Booker, and whose meetings have not been advertised or made open to the public.

– Graduates of the Citizen’s Police Academy, an educational course for residents who have an interest in the inner-working s of law enforcement

– City residents (this group contains residents, some of who have previously filed citizen complaints against police personnel)

– Members of the Decatur Police Department

Merriss said the groups are able to provide objective feedback about the police department.

“While Chief Booker has offered a welcome at some of the sessions, no Police Department staff has been part of any community focus group,” Merriss said. “While there have been focus groups with City staff, no City staff has participated in a focus group of residents or other community members.”

She said participants were selected from “a broad cross-section of stakeholders” in the community. Some have had positive experiences with the police, and others haven’t.

“Several members of the Leadership Circle have not had favorable interactions with law enforcement, including the City of Decatur Police Department,” Merriss said. “The same can be said of other groups as well. Organization by Design has been involved in identifying the types of stakeholders who traditionally have not had positive biases towards law enforcement.”

Merriss added that this is “the beginning of the process” of developing the strategic plan and the public will eventually be able to comment.

“There will be opportunities for the broader community to review and offer comments once a draft plan is completed,” she said. “Community-based strategic plans are an important part of defining how we go about partnering with the community to provide the best possible services to Decatur. The final strategic plan is ultimately the Police Department’s operating blueprint for the future.”

As the focus groups and Leadership Circle meet, the group that kicked off this discussion continues to put pressure on city commissioners.

On June 1, Decatur Community Coalition members presented a letter to commissioners asking for more detailed information about the city’s efforts to address concerns about racial profiling. The letter says that the city in April responded to a request for information the group made in September.

“While we appreciate your busy schedule as outlined in your most recent letter, it would be most helpful if we could be assured that you are making this issue of police policy a high priority to the City Commission,” the letter says. “Your letter stated your understanding that, because we had met with Police Chief Booker after we sent our last letter, no response from you was needed. Please know that we see the City commission as the top authority int he city of Decatur. As a result we expect a prompt, formal response. We are looking to you to set the policy and the tone for the Police Department and we see you as the accountable party when it comes to racial profiling in Decatur.”

Read it: Here is the letter from the Community Coalition (click to enlarge) 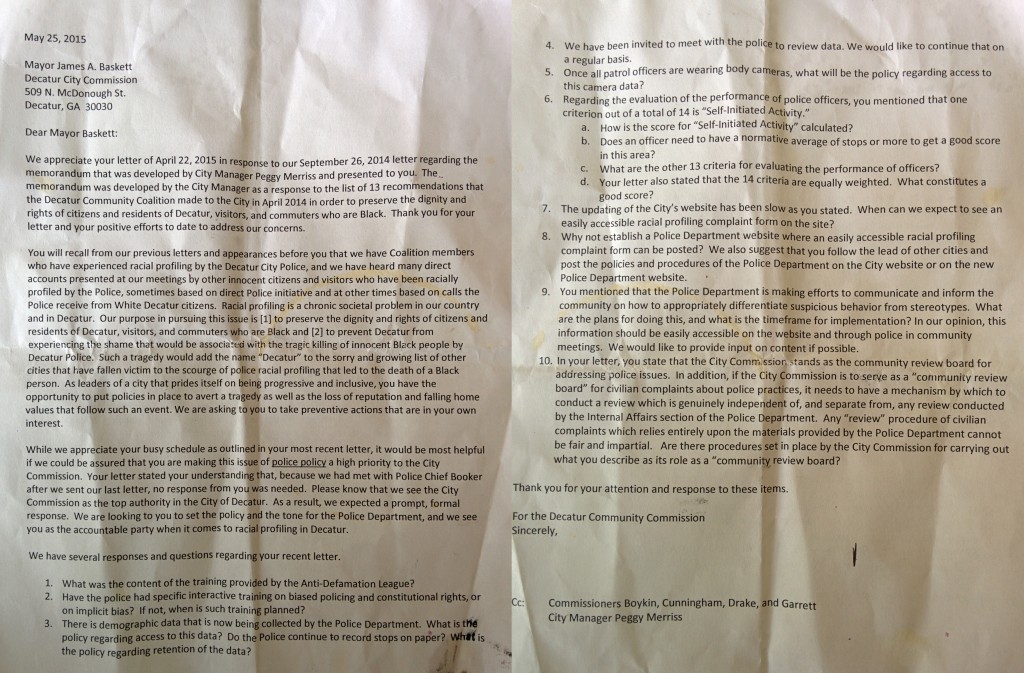 Denard, a community coalition member who has participated in focus groups and the Leadership Circle meetings, said he sees benefit to having parallel approaches.

“We see it as a two-pronged effort, not necessarily dependent on each other, two separate efforts which have the specific potential of getting this issue addressed,” Denard said.

Denard said the discussion needs to be out of the public view for now to lay the groundwork for a broader public dialogue.

“I’ve had some experience in being engaged with the public and you do have to get some ducks in a row before you do that, especially recognizing that when you do go into the public the dynamic process continues,” Denard said. “It kicks up to another level.”