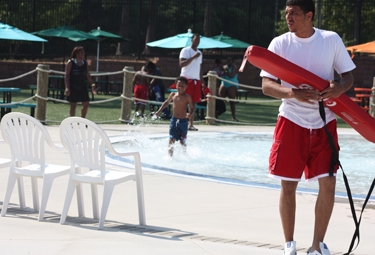 Two DeKalb County pools are temporarily closed in the midst of a heatwave that won’t quit.

The county said the Kelly Cofer pool, located at 4259 N. Park Dr. in Tucker, is closed because of an electrical surge caused by lightning damage. Equipment to the pool is expected to be repaired and the pool reopened by Saturday, June 27, according to a press release.

The release also said, “A water main break has closed the pool at Gresham Park, 3113 Gresham Road, Atlanta, GA 30316; however the recreation center is not affected by the water main break and remains open.”

Last week, DeKalb County opened cooling centers in response to the heatwave and allowed residents to use DeKalb county pools free of charge until Monday, June 22. DeKalb County extended free pool use to county residents this week through Thursday, June 25.

The National Weather Service issued a heat advisory Tuesday with heat indices reaching or exceeding 105 degrees. Above normal temperatures are expected to continue through Thursday.

Here is the press release DeKalb County provided last week with links for local libraries, pools, and other cooling centers:

DECATUR, Ga. – DeKalb County announces the DeKalb County Emergency Management Agency (DEMA) and Department of Recreations, Parks and Cultural Affairs have opened cooling centers for citizens to use during the expected heat wave. County libraries and recreation centers can be used as cooling centers during their normal business hours, and all seven county pools, excluding Browns Mill Aquatic Facility, can be accessed by DeKalb residents free of charge.

County residents are welcomed to sign up for DeKalb’s high-speed emergency notification system,CodeRED, which has the ability to quickly deliver time-sensitive messages via voice, email, and text to targeted areas of the county during emergency situations.