There are not one, but two opportunities next weekend to get your yoga on and enjoy the summer solstice.

The longest day of the year is Sunday, but that doesn’t mean you can’t celebrate all weekend.

On Saturday, June 20th from 1:30 p.m. to 4 p.m., you can get your downward dog pose in and get your kid’s face painted at a street festival called Summer Solstice Yoga for Youth in the eco-arts district on East Howard Street.

Mercado said there will be live music at both Solstice Urban Retreat and Color Wheel Studio. Solstice will hold a family yoga class at 2 p.m, and Color Wheel will have arts and crafts for families. In between those two businesses, Mercado said there will be food and vendors, including Whole Foods, Decatur Farmers Market, Suja Juice, Golda Kombucha, Kind Bar, and a popcorn vendor called 26th & Popped.

Mercado said the event is free and very family friendly with face painting and balloon animals for the kids.

If you want more yoga that weekend, Be Active Decatur is holding an outdoor Summer Solstice Yoga class at 9 a.m. on Sunday, June 21st next to the Decatur Police Station.

The description of the event says, “Everyone in the community is invited to celebrate the longest day of the year with us as we offer a Summer Solstice Yoga Practice. Bring Dad along for a great start to Father’s Day.”

A mat is needed. All are encouraged to come, even if you’ve never done yoga before. 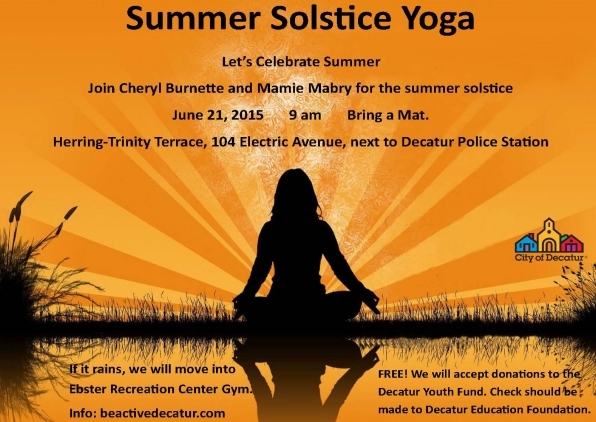