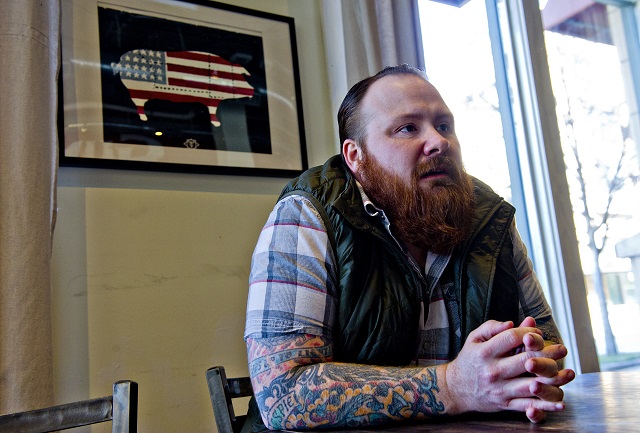 CNN recently interviewed Kevin Gillespie about his upcoming Decatur restaurant “Revival” and reports the celebrity chef is a little anxious about the restaurant’s debut.

The restaurant will be his ode to traditional Southern food, the kind he grew up eating. But the personal connection has made the chef a little touchy about the end result.

Gillespie told CNN that he can weather criticism about his remakes of modern classics. But start dissing his grandmother’s recipes, and he’ll take it a little personal.

“But if you don’t like the way we make cornbread, and that’s a recipe that my family has passed down from generation to generation, I might either cry myself to sleep that night or punch you in the face,” he told CNN. To read the full story, click here.

So, to reiterate, don’t talk smack about his family’s cornbread recipe.

CNN says Gillespie is shooting for a late July opening in the old Harbour House space on Church Street.

He’s already loaded up an Instagram profile with several drool-worthy photos. A few of the restaurant’s potential future entrees …

We are smoking some pork today. Counting the days until we open our doors. #BBQ#southernfood#delicious#revivaldecatur#pork

Smoke and glory !! The word is pork!! #wholehogbbq#smokin#revivaldecatur#upallnight

Also, this September, Gillespie will be an instructor for Simple Abundance cooking classes being held in Decatur.

The classes, hosted by Cook’s Warehouse in Decatur, raise money for the Atlanta Community Food Bank.

Here is the announcement for Gillespie’s class:

A Night at Revival

Top Chef Alum and local restaurateur Kevin Gillespie will soon open his latest concept, Revival, in Decatur and this class will provide a great chance for fans to sample his latest. With a fresh take on the traditional, family-style Sunday dinner, and a focus on farm-raised and artisan-prepared ingredients, this is Chef Gillespie’s way of reviving and celebrating the traditional dishes he grew up eating and that represent the beautiful culinary traditions of the Deep South.  Chef Gillespie and Revival’s Executive Chef Andreas Müller want to breathe new life into the classic family-style restaurant. During this class Chef Gillespie will demonstrate how to make a salad of local Arugula, Fig, Country Ham, Balsamic, and Spiced Pecans; an entreé of Chicken Fried Steak with Skillet Gravy served alongside of seasonal side dish featuring what is fresh and available at the time of class; and dessert will be Chef Gillespie’s Warm Banana Pudding. Evening includes wine tastings sponsored by Sherlock’s Wine Merchant and a chance to win tasty door prizes provided by Bella Cucina Artful Foods and Cabot Cheese.