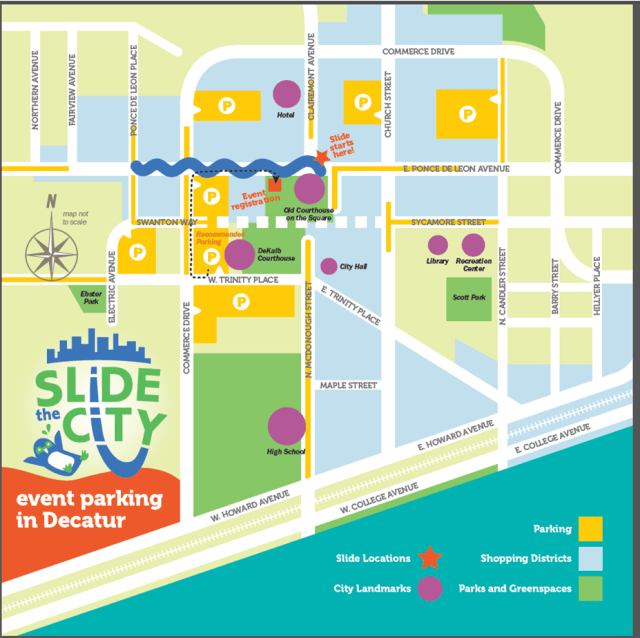 The city of Decatur says it extended the hours for Slide the City and reduced the number of tickets available in order to avoid problems seen previously in other cities. Hours were initially scheduled to be from 11 a.m. until 7 p.m. The event will now run from 10 a.m. until 9 p.m.

Special Events Coordinator Katie Abel said in an email to Decaturish, “The hours were extended to help keep the lines from being too long.”

Decaturish also asked about expected attendance. In a post on The Decatur Minute blog Wednesday, the city said 4,000 people were expected to attend the event. However, it was initially reported that 6,000 tickets were for sale. The city later reported that all tickets for the event had sold out.

Abel clarified, saying in an email, “Initially they thought they would release 6,000 tickets but after other events had issues with long wait times, we worked with Slide the City to reduce the number of tickets sold so that all of the participants have adequate time to enjoy the event. I believe a total of about 3,600 tickets were sold but with all of these sliders come their families and friends so we are expecting a very big crowd in Decatur on Saturday.”

The city says the 1,000-foot-long water slide down W. Ponce de Leon Avenue will close part of that street.

On its blog, the city says drivers should note W. Ponce de Leon Ave. will be closed between Clairemont and Fairview Avenues starting at 3 a.m. on Saturday until midnight. It also provided a map showing where the slide will be located Saturday.

Decatur says it’s not allowing outside vendors, in an effort to support local businesses. It notes Decatur restaurants Cafe Lily, T. Mac, and Ted’s Montana Grill have specials planned for the day.

In celebration of the 30th anniversary of the Decatur Business Association, the DBA along with the City of Decatur has decided to shake up our traditional summer event, the Decatur Beach Party, and make a huge SPLASH this summer. For one day only, there will be a 1000 foot long water slide in the middle of W. Ponce de Leon Ave, stretching from Clairemont down to Ponce de Leon Place.

Here are some important details to note:

We encourage people to walk, ride bikes, to take Marta to Decatur. If you need to drive, please note the various parking decks on the map

Several of our favorite Decatur businesses will be hosting patio parties and specials on Saturday. Make plans now to hang out at Cafe Lily, T. Mac, and Ted’s Montana Grill-all who have specials planned for the day!