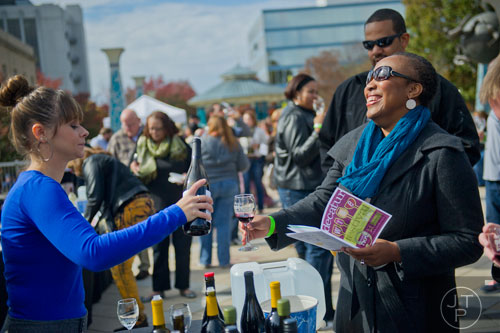 Margo Kemmerer (left) pours a glass of wine for Shauntice Allen during the Decatur Wine Festival on Saturday, November 9, 2013. Photo by: Jonathan Phillips

Wine Spectator has released its 2015 Restaurant Awards and several Decatur restaurants have made the list.

Café Lily and No. 246 were both recognized on the list, as well as the now closed Ink & Elm in Emory Village.

The publication highlighted Café Lily’s California wines, while noting that No. 246 specialized in international options. Both were ranked as moderate when it came to price. Each got an “Award of Excellence,” or one wine glass.

Wine Spectator said, “All these dining destinations—more than 3,600 worldwide—share a dedication to wine that has earned them one of the three award levels in Wine Spectator’s 2015 Restaurant Wine List Awards.” The other two award levels are the “Best of Award of Excellence” and the “Grand Award.”

Other Atlanta restaurants included BLT Steak, Bones, Murphy’s in Virginia Highland, St. Cecilia in Buckhead, and Sotto Sotto in Inman Park. BLT Steak and Bones both received the Best of Award of Excellence. It appears no restaurants in Georgia got three wine glasses — or the “Grand Award.”

The city of Decatur noted on its blog that “The full list of award winners is featured in Wine Spectator’s August 31 issue, which hit newsstands July 21. All of the restaurants can also be found in WineSpectator.com’s Restaurant Search.”