This just in from DeKalb County … 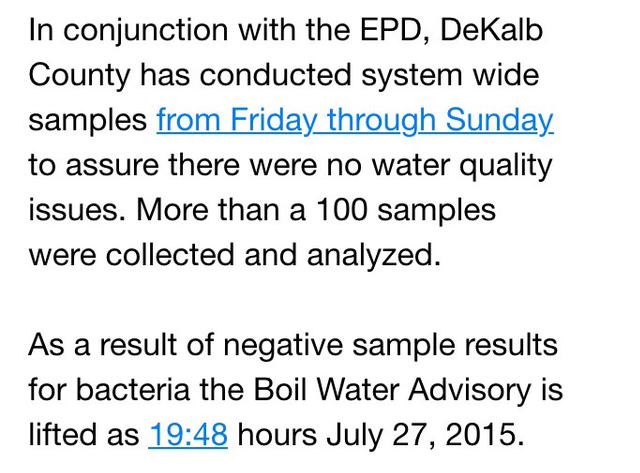 County spokesperson Burke Brennan also confirmed that the advisory has been lifted for DeKalb residents.

The boil water advisory is the result of a water main break that occurred on July 23 when someone hit a fire hydrant with a mower. The hydrant sits on a 48-inch main at Henderson Mill and Evans roads. The problem was fixed on Sunday, but the advisory, which began on Saturday, remained in effect through Monday evening, July 27.

The problems have left many residents and business owners, particularly restaurants, frustrated. Some restaurants have had to limit their menus to avoid using the county water during the advisory.

The water main debacle hit Decatur especially hard. The city of Decatur had to close its Slide the City water slide event early on July 25, bringing an abrupt end to a 1,000 foot water slide on West Ponce. The city reported that 3,600 tickets had been sold for the event. There’s been no word on rescheduling the event or refunds for ticket holders.

The county had described the boil water advisory as precautionary and said initial test results showed no bacteria.

Decaturish has been digging into why such a seemingly-minor issue created such havoc around DeKalb County. An email exchange shows that there was a dispute between the county and a contractor hired to fix the main. County commissioners have also raised questions about the county’s response and efforts to inform the public about the issue.

DeKalb has encouraged residents to sign up for emergency notification alerts with Code Red in case something like this crops up again. To sign up for notifications on your land line or mobile phone, click here.