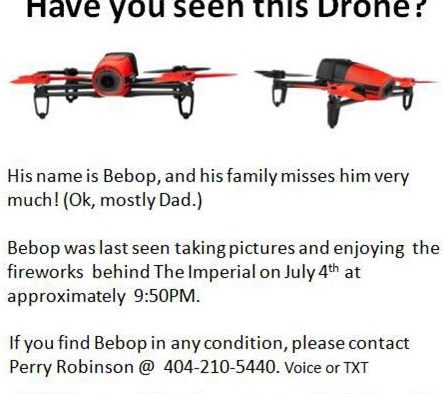 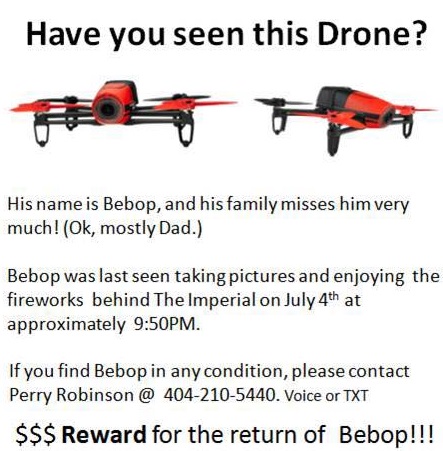 A Decatur man as recovered is Bebop, a drone that went missing over the Independence Day weekend.

According to a flyer being distributed around the Oakhurst neighborhood, Bebop’s dad missed him. Perry Robinson, who lives in Oakhurst, took the red drone out on July 4 to film fireworks in Decatur. But he lost contact with the drone during the show.

“I was filming fireworks and the drone got lost in an explosion,” said Robinson, an avid drone hobbyist. “I don’t think it got hit. It lost connection. It disappeared into the darkness.”

CBS46 reports Robinson’s drone was returned to him on June 6.

The drone and controller cost about $900 and Robinson had offered a reward for Bebop’s safe return. He said it isn’t the first time he’s lost a drone this way.

“I’ve lost a couple before,” Robinson said. “That’s the first expensive one that I’ve lost. I’m still hopeful and in recovery mode.”

Robinson said he sent up his other drones on a quest to find Bebop, reasoning, “Use a thief to catch a thief. Why not use a drone to catch a drone?”

On Monday, July 6, he said he might have spotted it on a local rooftop.

“I have the challenge of getting it off said roof,” Robinson added.