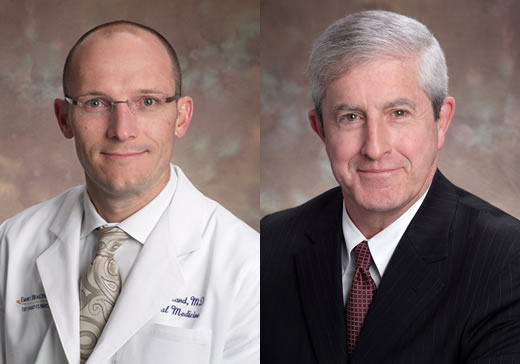 Emory says Bachman is moving into a new hospital role as of August 14th, serving as executive director for the expansion and renovation of the hospital. That includes the completion of a new $400 million nine-story hospital wing being built on Clifton Road.

A press release from Emory states that Gartland came to Emory as a physician in 2005 and has held several leadership roles. He became COO of Emory University Hospital in 2012.

“Since then, he has played key roles in numerous accomplishments, including the hospital’s stellar University HealthSystem Consortium (UHC) rankings for quality and safety achievements, Magnet accreditation for nursing excellence and the successful treatment of four patients diagnosed with Ebola virus disease,” the press release says.

“Moving Bryce into the CEO role is a natural progression and a testament to the strength of our succession planning program,” Dane Peterson, Emory Healthcare Hospital Group President, is quotes as saying in the press release. “I have full confidence that Emory University Hospital will continue to excel with Bryce at the helm of an already strong leadership team. While we will miss Bob’s leadership skills, we know his talents will be instrumental as we continue to expand and grow at the hospital.”