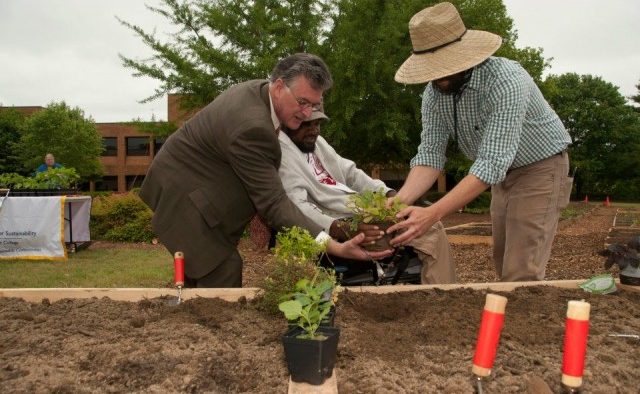 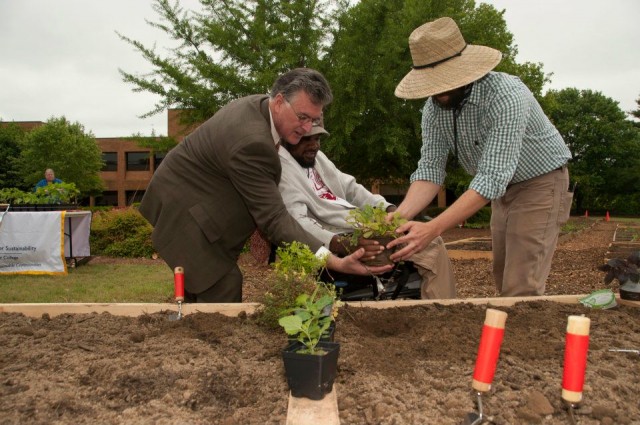 With sweat beading down her forehead and dirt caked underneath her fingernails, Kayla Sims’ green thumb started growing in her school’s community garden.

“I loved it so much, I decided to start the Earth Club for Decatur campus,” she said. All it took for Sims to be hooked on the botanical bliss was one day this past January, during Georgia Perimeter College’s annual “Martin Luther King Day of Service.”

Now, according to several stakeholders, the beloved student garden faces the threat of being permanently uprooted for the alleged crime of being an eyesore to the administration.

However, GPC has made no official announcement about its plans for the garden and the college’s president did not respond to multiple requests for an interview.

Rumors of a plan to either remove or relocate GPC’s community garden (currently stationed at 3251 Panthersville Rd., GPC’s Decatur campus) began swirling around campus in March and led to several students—including Sims—and faculty rallying to stop any such activity by the administration.

Over the past few months, Sims has written letters, organized students and started a petition, which has garnered more than 120 signatures, to save the garden.

After receiving the bureaucratic run around, she arranged for a group of students—which included Tyla Moore-Gulley, Student Government Association senator for sustainability—to meet with interim President Rob Watts.

Before meeting with Watts, Sims said, “The only response that I received was word from [the director of student life] saying that he got a call from President Watts saying that the garden was ugly and that the fence needed to be worked on and it didn’t have curb appeal.”

On July 13, Sims and her comrades sat down in Watts’ office to discuss the garden’s future.

“He tried to filibuster the meeting,” Sims said, adding that he filled up a majority of the meeting time beating around the bush (no pun intended) and asking students questions about what their plans were after graduation.

“I really thought it was a waste of time,” Moore-Gulley said.

“I felt that he was just trying to figure out when all of them were going to be gone,” Sims said. “He just kept talking about things that had nothing to do with questions I was asking him.”

And the most important question Sims had for Watts, which she said was unanswered during the meeting: What is the future plan for the garden?

“At the present time, no decision has been made about moving the garden or about other possible locations on campus,” Watts said in an email statement. “I do not anticipate a decision about location until this fall or winter.”

During the meeting with Watts, Sims also voiced concerns about the overheard plan to relocate the garden from its front-facing position to a more secluded location behind the school.

“This is a community garden, you want it to be seen,” Sims said. “You want people to know about it. You want them to be apart of it. It should stay in the front.”

And moving the garden to the back poses its own problem.

“If they move the garden in the back, it’ll be in a flood zone,” Sims said, adding that the creek located near the backside of the school flooded in 2009.

What’s more, the creek in question is contaminated with fecal coliform (which comes from, yes, feces), according to the Environmental Protection Agency.

“The creek that the water comes from has sewage lines in there, so it’s contaminated with fecal matter,” Sims said. “And you can’t feed people E. coli produce.”

The community garden, which found its home at the front GPC’s Decatur campus, is almost visible from Clifton Springs Road. It came about as a small part of a 2012 plan to expand the college’s environmental studies program and as an effort towards making the college more “green” and sustainable.

The college’s suitability efforts received notice from, and even collaboration with, the EPA.

The GPC garden also has roots in the community with local organizations such as the United Methodist Children’s Home, Atlanta Food Bank, The Local Source at Global Growers Network and the Clarkston Community Center. Through its partnerships, the 9,000 square foot garden has also donated about 1,500 pounds worth of food.

“We truly value the contributions of the GPC Decatur community garden and hope to extend this partnership for years to come,” wrote Susan Pavlin, consulting director for The Local Source, in a letter in support of the garden.

Tyrie Smith, a former GPC employee and one of the garden’s co-creators, said the garden’s stakeholders “have quite literally poured blood, sweat, and tears for the last three years” into the garden.

Despite the ambiguous reassurances from the GPC administration that the garden won’t be moved for now, students and faculty still fear the worst.

“I’m just upset about it, I really am,” Moore-Gulley said. “I don’t even know how to get over it because the garden is made out of love.”

Smith also questions Watts’ timing on the attempt to upset the garden. Watts only has a few months left as interim president before Georgia State University merges with GPC. Notably, GSU has an avid Office of Sustainability and environmental program, which even had a class this summer on “growing local food.”

Watts began his role as interim president in 2012 when former President Anthony Tricoli left the college amid a budget crisis. Following his appointment, almost 300 people were laid off and several of Tricoli’s programs were shutdown.

Additionally, Tricoli filed a lawsuit last year against a handful of former and current GPC employees—including Watts—for “acts of fraud” which he alleges were conspired against him to remove him from office.

Upon hearing about the garden situation, Tricoli emailed a statement to explain the original purpose behind the creation of the garden.

“The garden was meant to be a living, learning center that could benefit students and their learning outcomes,” Tricoli wrote. “From its conception it was very carefully and strategically located by the students, faculty and staff to be at one of the entrances to the Decatur campus for all to see and admire and to inspire the education of all. The garden gives back far more than it will ever take in square feet.  Together, we took plot of dirt and grass and turned it into a wonderful learning center at GPC, which just also happens to provide life to our community.”