Emory Village is set to welcome a new restaurant, and possibly, another wine store.

A sign has been posted that Messi’s Cafe & Lounge is coming soon. The website describes the cuisine as “authentic traditional Ethiopian” food. It also notes there will be a lounge, separate from the dining room, with televisions and hookahs after 3 p.m.

According to its Facebook page, Messi’s will be beneath Saba, the pasta restaurant in the village.

A spokesperson from Messi’s told Decaturish, “Messi’s will also host regular events like Ethiopian coffee ceremonies. We are getting our final inspections now and hope to be open by the end of July or early August.”

Another wine store has been proposed for Emory Village. The Emory Village Alliance reports a developer has asked about converting the old Chevron site into a wine store and possibly, a restaurant. 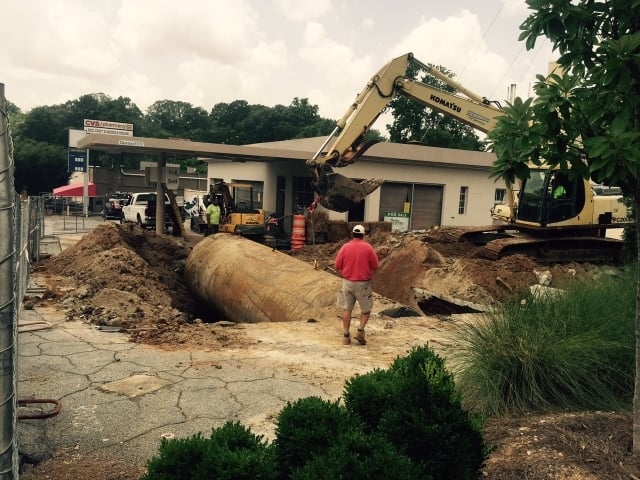 The alliance says gas tanks were removed in early July to prepare for a new business.

According to plans submitted to the DeKalb County Historic Preservation Commission, a Sherlock’s Wine Merchant store has been proposed for the space on 1574 North Decatur Road. A letter to the DeKalb Board of Appeals says, “The present proposed use of the property is as an approximately 2000 SF wine store as described in the Emory Village Overlay District, however it is essential to the applicant that the property meet all the necessary requirements to permit a restaurant use as future tenant.”

a. A special exception to reduce the required number of off street parking spaces for an approximately 2000 SF restaurant use from 16 spaces to 11 spaces. This would waive Sec. 27-728.11.14 for food service use requiring 8 spaces per 1,000 square feet of floor area to 5.5 spaces per 1000 square feet.

b. A waiver to allow the use of small car “compact” spaces despite the total number of off-street parking being less than 20 spaces pursuant to Sec. 27-766 (b)(3).

c. A waiver to allow parking in front of the building pursuant to Sec.27-728.11.4.(g)(6) and pursuant to the Emory Village Design Standard Guidelines Sec. II.B.2.

e. A waiver to eliminate the required 10 ft planting strip between off street parking and the public sidewalk pursuant to Sec. 27-766(4).

f. A waiver to eliminate the 5 ft wide landscaping buffer area between the parking lot and the build to line pursuant to the Emory Village Design Standard Guidelines Sec. II.B.2.

Sherlock’s won’t be the only wine shop in Emory Village – Purple Corkscrew is a “boutique Wine Shop & Tasting Room for wine lovers” on Oxford Road.