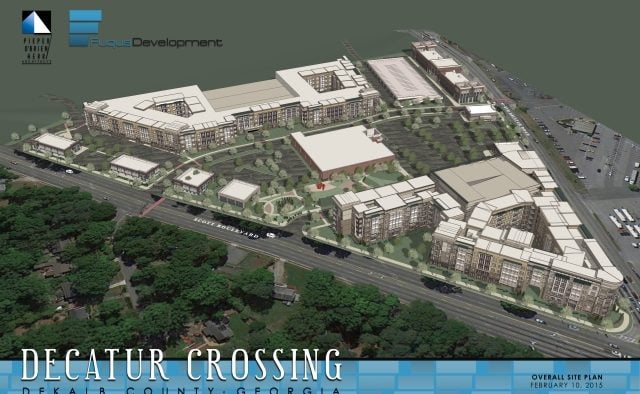 The Medlock Area Neighborhood Association, or MANA, released the details of the negotiation on Phase II of Decatur Crossing, a mixed-use development being built in the former location of Scott Boulevard Baptist Church.

Last month DeKalb County Board of Commissioners (BOC) approved rezoning requests for Phase II after deferring the vote at a previous meeting. According to MANA, it had requested the deferral while it negotiated with developer Fuqua “for improvements to pedestrian safety and access and alternatives that will help modulate cut-through traffic through our neighborhoods.”

The BOC voted in favor of the rezoning request with 27 conditions negotiated by the Cross-Neighborhoods Committee* plus two more which the Commissioners added at the BOC meeting. All these conditions will become part of the permanent zoning for the property.

The Cross-Neighborhoods Committee also negotiated a separate, legally binding zoning agreement which includes $40,000 in funding for off site improvements, including a partial closure of Blackmon Drive at the new signal (on Scott Boulevard at Blackmon Drive) and a pedestrian island at the crosswalk across Scott Boulevard at the new traffic signal. The additional funds will go towards sidewalk projects on N. Decatur Road (in front of Church’s Chicken to form a complete sidewalk on that block of N. Decatur) and Scott Boulevard (between Willow Lane and Medlock Road). The legally binding agreement was signed by MANA with the support of the entire Cross-Neighborhoods Committee. The 27 negotiated conditions and agreement can be reviewed here.

Traffic was a major concern of residents at that March meeting, and the Blackmon Drive decision appeared to have emerged from that discussion:

After meeting with neighbors on Blackmon Drive and discussing all of our options with the County, we decided that a partial closure of Blackmon Drive was the best solution for the neighbors on Blackmon as well as the larger neighborhood. Once the traffic signal is installed and the partial closure is in place, the only traffic movement allowed from Blackmon to Scott Boulevard is a right out only. This will eliminate right turns into the neighborhood from west-bound traffic during the morning rush hour as well as greatly reduce afternoon traffic using Blackmon to exit the neighborhood.

Here’s an illustration of the new traffic patterns: 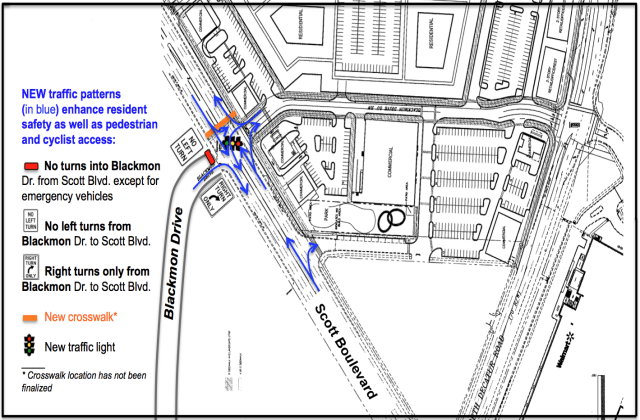 No retailers have been announced, but as Decaturish previously reported site plans include a natural foods grocery store as an anchor tenant.