As DeKalb County awaits the results of a tests that could end a boil water advisory, many residents are still dealing with the headaches the advisory has caused.

The advisory stems from a water main break that occurred five days ago. County commissioners are asking questions about how the county’s leadership let things get so out of hand.

The water advisory caused the Decatur Family YMCA to close its camp for Monday, July. 27. The Chick-Fil-A at North DeKalb Mall wasn’t serving drinks made with county water due to the boil water advisory, which began July. 25. The Centers for Disease Control’s Roybal campus was also closed Monday.

The county announced on Monday that test results are still pending.

Good morning. We are still awaiting results of the water tests. We will update here as soon as we know.

It’s still not clear how a mower hitting a fire hydrant on a 48 inch main transmission line at Henderson Mill and Evans roads created so much chaos. Many residents in Decatur, Avondale Estates, Tucker and Stone Mountain had drastically low or no pressure on Thursday evening, Friday, Saturday and Sunday morning.

The main was supposed to be fixed by Saturday morning, but water soon began leaking again. Businesses opted to close early or stop serving food altogether while DeKalb County made the repairs to the water main. The city of Decatur had to close its Slide the City water slide event early, bringing an abrupt end to a 1,000 foot water slide on West Ponce. The city reported that 3,600 tickets had been sold for the event.

Commissioner Kathie Gannon told Decaturish the incident did not reflect well on DeKalb.

“Given our lack of confidence from the people, this does nothing to instill faith in DeKalb County and that reflects on all of us, myself included,” Gannon said. “We absolutely need to know where the breakdown was. There was definitely a communications breakdown, no doubt about that.”

Communication from the county didn’t occur until the morning after the break, July 24. No one was sure what had happened when reports about water pressure issues began to trickle and then gush over social media on Thursday evening, July 23.

The county spokesperson Burke Brennan said the county is reassessing its communications strategy. Gannon said there is an emergency communications plan in place. She wants to know why it wasn’t implemented sooner.

“We have an emergency management protocol,” Gannon said. “The protocol was not in place as far as I can tell until Saturday, so whoever was making the decisions decided that it wasn’t, I guess, serious enough to institute the protocol.”

Commissioners Nancy Jester and Jeff Rader were concerned about the county’s inability to fix the problem initially. Jester said she wanted to understand the chain of events that led to the failure of the fix the county implemented on Saturday. She wondered if the county was equipped to deal with it.

“Internally in the county, if we’re not ready to mobilize as a county and get the resources there and have competency to fix the problem, we should’ve called in the contractors from the get go,” Jester said.

Rader said part of the problem was the placement of the fire hydrant. He said locating it on a 48 inch transmission main was the equivalent to hooking up a house to a high-voltage electrical line responsible for delivering power through the region. That caused the problem to be more dramatic than it otherwise would’ve been, he said.

Like Jester, Rader wanted to know why the county’s first fix failed.

“You took it down Friday night and then it blew up after that and you had to do it a second time,” Rader said. “That’s the part I think is going to require further investigation. It’s one thing to have a disruptive failure. Ultimately what we’re dealing with is water and steel. It’s not a solution that is un-doable. You could make the case that it could’ve been disruptive the first time around, but why it broke again? That’s the thing I think we’re going to have to really find out and try to hold people accountable for.”

Gannon also said this is an opportunity to educate the public about the vulnerability of the county’s aging water infrastructure.

All the commissioners Decaturish spoke to wanted to understand why communication failed along with the water pipes. In one example of the disconnect, an email was sent to CDC employees notifying them of the boil water advisory shortly after 1 p.m.

The email was forwarded to Decaturish … 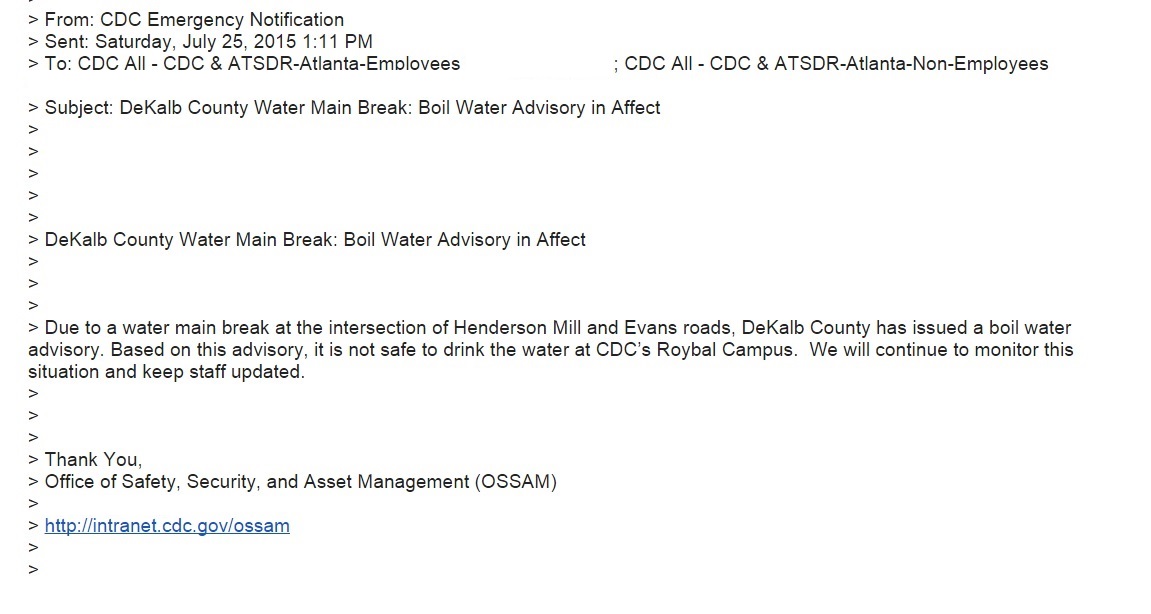 However, the county did not issue its boil water advisory via Twitter – the only reliable source of information over the weekend – until around 3 p.m.

A county spokesperson said she was unaware of any advance warning to CDC. Rader called the boil water advisory a “draconian” measure required by state regulations. When informed about the time difference between the boil water advisory to CDC employees and the rest of the county, he speculated that the county was likely in close consultation with the CDC simply because the CDC is in DeKalb.

“Nobody wants to (issue a boil water advisory), because that’s the complete deal killer,” Rader said. “People can tolerate trickling water and inadequate pressure, provided there’s not a fire or anything. Once you get to the point of saying you have to boil water, commercial uses have been completely constrained. If you’re under public health regulation, the risk of using the county’s water at that point is untenable. Clearly we are unique in this region in that we’ve got a federal agency located in DeKalb County. I would speculate maybe there was some consultation as a result of that. I don’t think CDC was particularly vulnerable to bad water quality.”

“It may be that our management of the initial repair in some way failed,” Rader said. “It’s going to be very difficult to get somebody to admit to that. I don’t know that for sure. I want to stress I don’t have any conclusive information on that. My observation is we always trumpet our achievements and we often do not put all our cards on the table when something has failed.”

Gannon said there was definitely a communications plan in place. Her question is, why were county officials so slow to implement it?

“Goodness sake, we get lots of homeland security money to put these things together,” Gannon said.