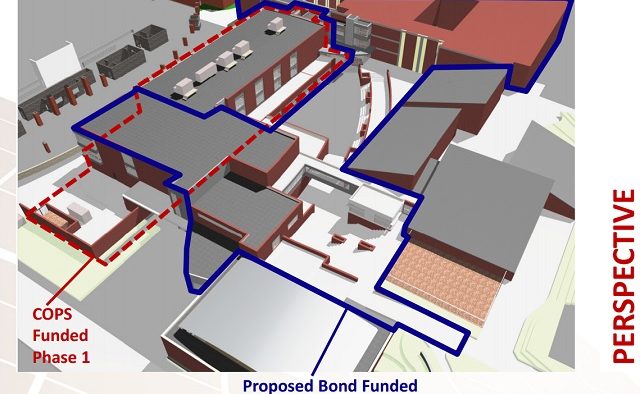 The City Schools of Decatur is asking residents to approve a $75 million bond referendum for school construction on Nov. 3. Residents would also have to agree to raise their own taxes by 8 percent.

But what are residents getting in exchange?

City Schools of Decatur has attempted to answer that question by creating an in-depth breakdown of what the referendum will fund. According to the presentation posted on the CSD website, current student enrollment is 4,658 students. The school system is projecting 6,527 students by 2020.

There are currently 1,717 students enrolled in grades Kindergarten through Third. The capacity of Decatur High is 1,163 students, CSD says, meaning that if all of those students attend the high school, it would be over capacity by 554 students.

CSD provided the following information on how the bond money would be spent:

– $22 million for additions to Decatur High School, which includes more classrooms, a media center, a renovation of the main building and more parking

– $15.4 million for renovations at Renfroe Middle, including more classrooms, labs, a cafeteria and performing arts space

The text of the ballot question doesn’t mention the potential tax impact. The question asks …

Shall there be authorized to be issued up to $75,000,000 of City of Decatur general obligation bonds for the purpose of financing a portion of the costs of (i) acquiring, constructing and equipping new school buildings and other buildings or facilities useful or desirable in connection therewith, including, but not limited to, new elementary schools and an early childhood learning center, (ii) adding to, renovating, replacing, expanding, repairing, improving and equipping existing administrative buildings, school buildings and other buildings and facilities useful or desirable therewith, including, but not limited to, Decatur High School, Renfroe Middle School, the 4-5 Academy and other existing elementary schools, (iii) acquiring, installing and equipping portable classrooms, including the infrastructure therefor, (iv) acquiring the College Heights Early Learning Center leased by the City Schools of Decatur, (v) acquiring 2 any property useful or desirable therefor, both real and personal, (vi) paying capitalized interest and (vii) paying expenses incident to accomplishing the foregoing?

Decaturish asked why the question wouldn’t include the potential tax implications for residents. CSD bond attorney Terri Finister said the law does not require it.

Finister said, “The Georgia statutes governing the authorization of general obligation bonds do not require the tax impact to be included in the referendum question. Under O.C.G.A. Section 36-82-1 (the ‘Bond Statute’), the notice calling the election (which will be published once a week for the 30 days preceding the election) is required to include the principal amount of the bonds, the purposes for which the bonds are to be issued, the interest rate for the bonds (which can be a not-to-exceed maximum rate) and the principal to mature in each year.

“Similar to the Bond Statute, Section 21-2-45.1 of the election code of the State of Georgia requires publication of notice of a special election for bond debt once a week for the four weeks preceding the election, and provides that the notice shall specify the date of the election and the question to be submitted to the electorate, the principal amount of bonds to be issued, the purposes for which the bonds are to be issued, the interest rate the bonds are to bear (which may be a not-to-exceed maximum rate) and the principal to be paid in each year. There are no statutory requirements as to the content of the ballot question.”

Here is the full presentation with more details about each proposed project that would be paid for with the $75 million general obligation bond:

Here’s an earlier version of the presentation posted on the CSD website.