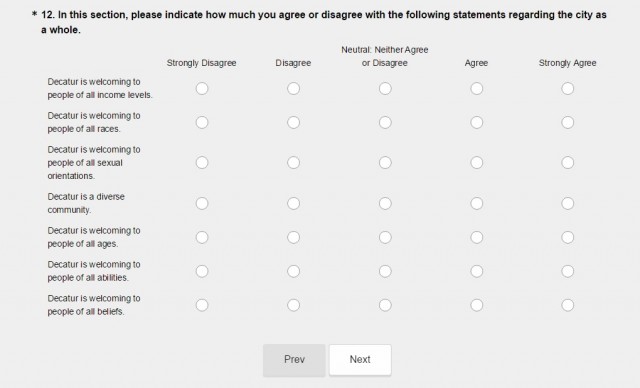 The city of Decatur is creating a plan to address the city’s dwindling diversity and wants feedback.

Under the auspices of the Better Together campaign, the city is supporting the creation of a Community Action Plan that will tie together input from around the community about issues surrounding diversity. As part of the development of the plan, there will be a “large-scale community conversation” held at the Ebster gymnasium on Aug. 29 from 10 a.m. to 3 p.m. To register to participate, click here.

The survey asks people whether or not they agree that Decatur is welcoming to people of all income levels, races, sexual orientations, ages and abilities.

The city recently entered into a $109,000 agreement with a consultant, The Art of Community, to help develop the plan and facilitate the conversation.

The consulting firm put together a Leadership Circle of residents and city employees that has been meeting regularly to develop recommendations about how the diversity discussion should move forward. The development of the Community Action Plan came about after a group of citizens, led by former School Board member Don Denard, raised concerns about alleged racial profiling by city Police Officers. The city decided to make it broader dialogue about race and diversity in the city.

As the city’s development has increased, its population of minority residents has decreased.

Decatur is also going to host a one-day “leadership and facilitation training” on Aug. 22.

“Join our one-day leadership and facilitation training to learn how to help people work across differences, respond to complex problems, and use inclusive approaches,” the announcement says. “Training happens August 22, 9:30 a.m. – 4:30 p.m., at the Decatur Conference Center in the Courtyard by Marriott, 130 Clairemont Ave.”