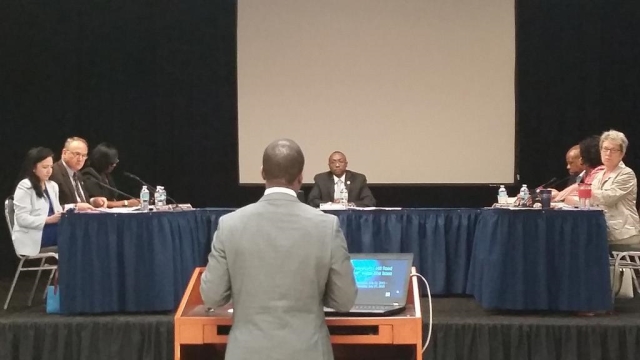 DeKalb County commissioners approved a proposal to partner with Atlanta United FC to build the soccer team’s $30 million practice complex and headquarters in the county.

The proposal, carried by Commissioners Mereda Davis Johnson and Stan Watson, would place practice fields, an outdoor stadium, and corporate headquarters for Atlanta’s first major league soccer team on property adjacent to Memorial Drive and Kensington Road. The county would provide 41 acres of land, paying for the cost of clearing the land and pay Arthur Blank, team owner, $7 million for the county’s use of 5,000 square feet of office space.

But during a commission meeting Tuesday morning, several commissioners expressed concern that DeKalb County was getting a raw deal and that more research and negotiation was needed before the memo of understanding was approved.

“I characterized this as a David and Goliath scenario, and it was,” Commissioner Jeff Rader said. “What makes the Scripture so compelling is that we all know that David should have won. And in this case, I’m afraid that Goliath did win. Without a clear measure of the project’s objective worth and sitting across the table from a trusted advisor, influential with politicians in DeKalb, DeKalb buckled. We squibbed the shot.”

Rader was referring to the fact that lawyers who have previously worked for DeKalb County represented Atlanta United at the negotiating table. He said between that and an overwhelming desire by CEO Lee May’s staff to get a deal, things moved forward too quickly.

“The interim CEO’s staff agreed to a deal that was six times more generous than Marietta offered on the land and $7 million cash on top,” said Rader, who called for a renegotiation on the proposal that would be in the public’s best interest.

Commissioner Nancy Jester said she would not be voting in favor of the proposal, telling the public, “I think you should have the right to speak. I have heard you loud and clear.”

Commissioners were concerned that the public had not had opportunity to comment on the proposal. Rader moved to allow public comment, but the motion was denied.

Commissioner Kathie Gannon called it a “behind-closed-doors deal” that should be “slowed down.”

She told the commission, “I deal with facts and analysis, not emotional votes.”

The crowd was vocal, applauding loudly when Commissioner Jester apologized to the public that they would not be getting to comment on the issue. At the beginning of the discussion, a woman walked up to the podium, stating, “I believe public should have the right to make a statement here.”

Commissioner Stan Watson asked CEO May to talk about the Memorandum of Understanding with Atlanta United and the effects it would have.

May was met with some heckling as he addressed the push to get the proposal through.

“I also apologize for the timing of this,” May said. “This is all about the timing. This is no attempt to pressure you all to do anything, to shove anything down your throats.”

May paused as a heckler yelled out about lack of respect, and said, “I’m trying to be as respectful as I can as people are shouting behind me. I don’t know how respectful that is.”

The CEO said the county itself just got word it was on the short list.

“Soccer season starts January 2017, so that’s not a lot of time,” May said. “I make no bones about it, we were very aggressive about seeking to land this deal in DeKalb County. We want to make sure we put our best foot forward.”

May said the memo of understanding the commissioners were looking at was laying out broad terms, but that lawyers would be hammering out the details of the agreement which includes a 3,500 seat stadium and three additional soccer fields.

May said the agreement would also provide office space for DeKalb County Parks and Recreation Department.

DeKalb County released a video featuring May, advertising a special announcement Tuesday at 4 p.m. related to the Atlanta United FC.