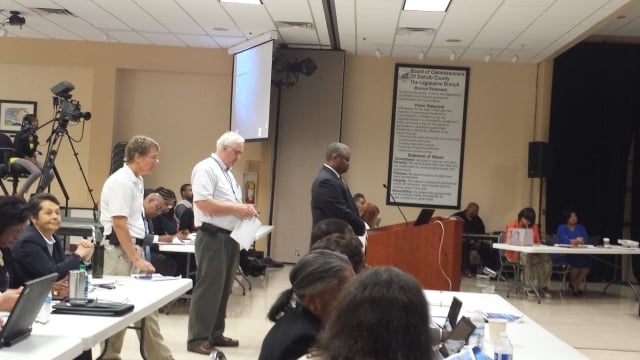 DeKalb County commissioners grilled county employees about the fire hydrant break that left people and businesses with low or no water pressure over a five-day period.

Three employees spoke at a commission meeting Tuesday, August 4, taking commissioners and the public through a PowerPoint presentation of what exactly happened from Thursday, July 23 through Monday, July 27.

Zach Williams, Chief Operating Officer for DeKalb County, started the presentation, before Commissioner Larry Johnson interrupted, asking about an apology to the public.

“Not only do we apologize for the inconvenience, some of which may have been unavoidable, we certainly apologize for our communication,” Williams said. “I take full responsibility that there are things in our communication apparatus and our systems that we will absolutely improve next time. Much of it was people just didn’t know.”

Johnson asked that an apology be put online as well.

“What is a seemingly routine matter, where the watershed department repairs those on a daily basis, numerous ones, this one was a little special in that this fire hydrant was directly connected to a 48 inch main water transmission line that was buried 25 feet,” Williams said.

Charles Lambert, Interim Director, DeKalb Department of Watershed Management, explained the details of the work, noting that near the 48-inch line were a high voltage electric box, a cell phone tower, sewer lines, storm drains, a natural gas line, and cable communication lines, all which complicated the repairs.

“The concern that we had in this is if the 48 inch line would go, it would take out that whole corner, potentially including the cell phone tower. Because this was a large volume of water,” Lambert explained.

Sue Loeffler, Director of DeKalb Emergency Management (DEMA), said she started holding conference calls with hospitals and nursing homes, letting them know that there would be a drop in water pressure.

Williams admitted that communication overall was lacking. “We should have contacted our critical facilities. We should have notified…that we were going to be doing that,” Williams said. “That Friday afternoon, a lack of notification is what caused a lot of major concern, because around 3 o’clock or so, people started losing pressure throughout Decatur and throughout the county. However, when we were doing it, we had our public information on site and they made the notification. But the notification was as we were doing it, as opposed to of a few hours prior in order to synchronize systems and to give people more opportunity to prepare. So that’s something we’ll absolutely do in the future.”

Commissioners were not satisfied with the presentation and explanations.

Commissioner Stan Watson demanded to know why the county didn’t have technical personnel or engineers available to handle the problem.

“What this is, is in a normal situation … we would probably do the repair,” Lambert explained. “In this location, cables, gas lines, we can’t dig a small space to go down that deep. That’s why we had a contractor come in to do these pinpoint type of repairs.”

As Decaturish previously reported, emails obtained showed a disagreement between the County Department of Watershed Management and the contractor brought in to fix the hydrant joint. Alessandro Salvo, CEO of county contractor GS Construction Inc., said when the county said the problem was “fixed” on Saturday, it actually wasn’t. He said his company had been called in to advise county crews on Friday, but crews did not actually locate the shut off valve and turn it off before reattaching the hydrant.

Salvo was in the audience Tuesday, and Commissioner Nancy Jester asked him to come up to share his experience. But as Salvo made his way to the podium, Williams quickly requested that not happen.

“I’ve seen emails going back and forth,” Williams said. “I would respectfully ask if the board would allow us to follow a protocol that goes from watershed to purchasing to me, when we’re talking about contractors and who did what. I’m simply concerned that I don’t want to give voice to any potential for finger pointing. We’re not doing that here. I’d like to get all the facts and make a determination.”

Jester extended an invitation for Salvo to attend a public works meeting that same day.

She also said to the three presenting employees, “No where in here [your review] did I see holding people accountable in here and increasing our competence level. It’s got to be more than just throwing money at the problem. … It’s about making sure that the right people are in the right seat. I hope that is part of your internal discussion.”

Williams was asked later about having contractors in place for emergency situations.

“The conversation becomes, at this point at looking at this past instance, was it clear what the expectation of the contractor was on Friday night?” Williams said. “It was not that we couldn’t identify a contractor with suitable equipment and the capability to fix it. It’s whether or not that was clear on Friday night.”

Commissioner Sharon Barnes Sutton said, “We could nitpick every little thing for hours and hours. Obviously something went wrong. We have to get to the root of it. Identify the problem and do something about it. I don’t think we need to wait until new director is hired to start researching what the problem is.”