The old Chevron site at Emory Village could become a wine store. Photo by Dena Mellick

Plans for a proposed wine store in Emory Village are temporarily on hold after a recent DeKalb Zoning Board of Appeals meeting.

A developer wants to turn the old Chevron station at 1574 North Decatur Road into a Sherlock’s Wine Merchant and possible restaurant.

But according to the Emory Village Alliance website, safety concerns over parking spaces led the DeKalb Zoning Board of Appeals to defer action for 30 days on requested variances at its August 12th meeting. The concern was about backing out of parking spaces onto the sidewalk and onto North Decatur Road.

The Emory Village Alliance said of the project, “The applicant, Doug Bryant, seeks to purchase the property and renovate the existing structure. The approved drawings show the existing building extended to enclose most of the area under the canopy where the gas pumps used to be. … The proposal requires several variances, including a variance to eliminate a landscaping buffer, a variance to allow small car ‘compact’ spaces on site, a variance to allow two parking spaces in front of the building closer than 30 feet, and a variance to reduce the amount of required parking if the owners convert the space from retail to restaurant in the future.”

The alliance said it “supports the overall restoration of the historic Chevron building,” but its board is concerned about safety and parking. It released a statement expressing those concerns. The alliance says a traffic engineer’s report is under way to look at the safety of two parking spaces near the front of the Chevron building.

Decaturish reached out to the Emory Village Alliance and will update the story if we hear back.

Plans submitted by the developer for the Sherlock’s Wine Merchant store. Photo obtained from EmoryVillage.org

A letter included with the plans sent to the DeKalb Board of Appeals said, “The present proposed use of the property is as an approximately 2000 SF wine store as described in the Emory Village Overlay District, however it is essential to the applicant that the property meet all the necessary requirements to permit a restaurant use as future tenant.”

Also included in the plans is an old photo of the Chevron station when it was a functioning gas station. It’s not quite clear what year it’s from, but you can see what is now a CVS was a Kroger store at that point. 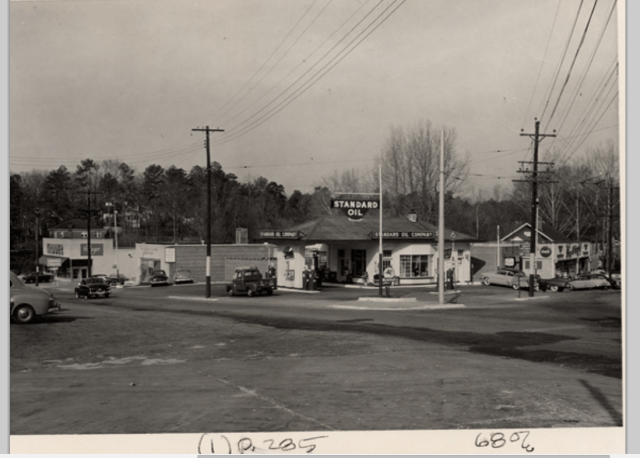 A photo of the old Chevron station in Emory Village. The photo was part of plans submitted to DeKalb County by a developer who wants to turn the historic building into a Sherlock’s Wine Merchant and possible restaurant.