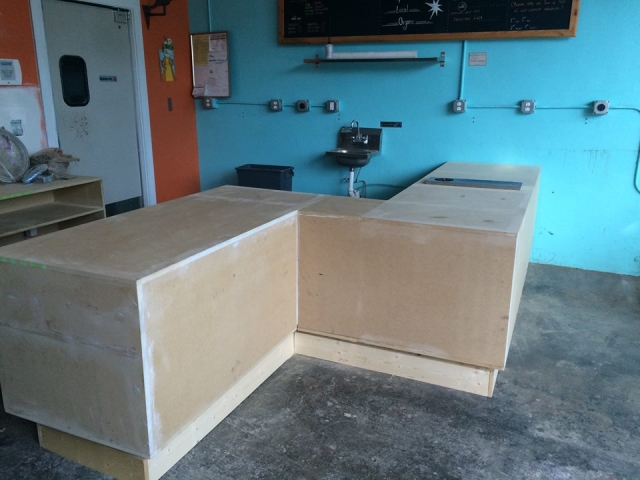 Part of Dulce Vegan’s renovations include moving the counter so customers can walk straight to the barista, instead of taking a right turn. Belser said it will be more welcoming. Photo from Dulce Vegan

A Kirkwood bakery is asking customers to help it make a big comeback after being closed for renovations.

Dulce Vegan is a vegan bakery and cafe that also caters to those with food allergies and dietary restrictions.

The bakery closed temporarily in March for some quick renovations and improvements. At least, owners Idalys Sansores and Howell Belser thought the construction would be quick.

“The best laid plans often go awry,” Belser told Decaturish. “We had imagined this would be so easy, we’re really just taking down a wall and moving some equipment around, no big deal. It turned out to be a lot harder than we anticipated.”

Belser said permit challenges and construction delays turned a one/two month closure of the bakery into a six-month closure. But the bakery is planning to reopen by the end of August, and it’s asking customers to help with an Indiegogo campaign to raise $9,000. On the campaign page it says, “We are in the homestretch of our renovations and need your help to re-open in August! … We have faced some setbacks that have chewed up and spit out our timeline and our budget, but this has not dampened our determination to get Dulce Vegan back open and better than ever.”

Belser said Dulce Vegan just needed a little extra push to get its doors back open, but she and partner Sansores plan to do so whether or not they make their Indiegogo campaign goals. Incentives for donating by the August 28th deadline include cakes made to specification, Dulce Vegan T-shirts, stickers, totes, and even a custom wedding cake for $1,500 that serves up to 75 people. 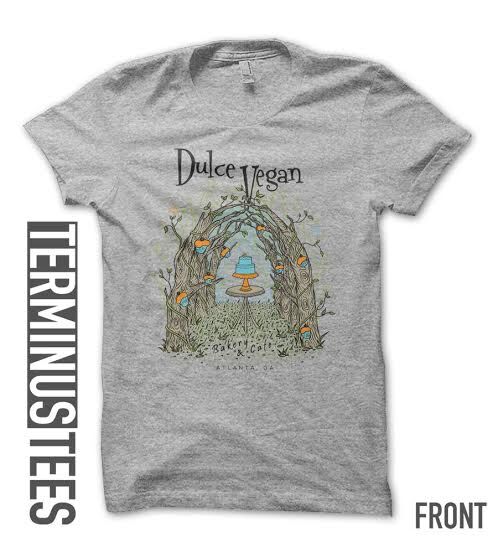 One of the Indiegogo campaign gifts is a Dulce Vegan T-shirt with different colors options. Photo from Dulce Vegan

Belser said it’s been hard being closed, but they’ve been getting plenty of encouraging messages. “Anytime you hit a roadblock, people say ‘don’t give up, hang in there, we miss you guys,’ and it means so much to us.”

Belser said she and Sansores, who is also her partner in life, started Dulce Vegan in 2006, selling vegan foods wholesale. In 2011, they opened the bakery in Kirkwood, taking over the coffee shop run by Kirkwood United Church of Christ. The shop, called Gathering Grounds, was a ministry of the church, but Belser said Pastor Susannah Davis wanted to focus exclusively on the church, and so she put Belser and Sansores in touch with her realtor.

“We consider her the Dulce Vegan angel in a way, because without her, we wouldn’t have found such a wonderful spot,” Belser said. “We love being in Kirkwood. Some people have come in to a vegan bakery who might not otherwise come and some of our biggest fans are our neighbors who aren’t vegan … but they love Dulce Vegan and love what we do there.”

“We love unique businesses in downtown Kirkwood and Dulce Vegan Bakery is certainly that,” said Kevin Cregan, president of the Kirkwood Business Owners’ Association. “We miss them and encourage neighbors and vegans in Atlanta to support this local, small business. We look forward to their doors opening again soon.”

Belser said she and her partner are working on a new menu for the reopening. She said customers can expect to see more gluten free and soy free options, as well as raw foods. “It’s just another step toward crafting a menu that no matter what sort of restrictions you have in your diet, you can come in and find something great.”

But Belser said, no fear, customer favorites like the cinnamon rolls, scones, and breakfast sandwiches will still be on the menu.