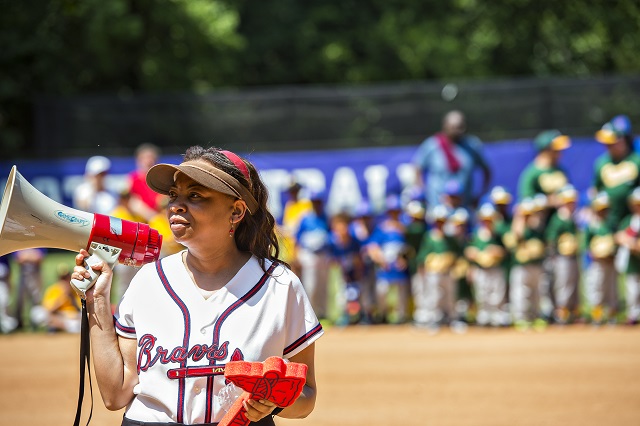 Kecia Cunningham (left) talks to teams using a bullhorn during the ceremony for the opening day of Decatur Youth Baseball at Oakhurst Park.
Photo: Jonathan Phillips

In a surprise move, Decatur Mayor Pro Tem Kecia Cunningham has resigned her post as a city commissioner.

According to Commissioner Patti Garrett, Cunningham has resigned to take a job in Pennsylvania and will start her new job on Monday.

Cunningham made her announcement at the end of the Aug. 17 City Commission meeting.

During the meeting, Cunningham said, “I was told when I left my office to cry pretty, so I’m going to try pretty hard to cry pretty over the next few minutes. It has been my distinct privilege and honor to serve the city of Decatur, its residents, its community leaders, its staff and my fellow (elected officials). However I find myself getting ready to embark on a new professional and personal adventure that will take me from home, my home of Decatur.

“Next week this time, I will be not even in the South. They tell me it’s cooler where I’m going, and I won’t need air conditioning as much, but my heart will be here. And so it is with profound mixed emotions that I announce that I am resigning my seat from the city of Decatur Commission effective immediately. The 16 years that I have had the joy and honor to serve, is to me the highest and best use of my life, and I am ever so thankful and grateful for this opportunity.

“Decatur is a wonderful place to live, work and play. We challenge ourselves. We deliver on the impossible. We make the hard decisions, and we work really hard. We play hard, too. I would not be here if it weren’t for (former) Mayor (Elizabeth) Wilson, and I am so glad she invited me to dinner all those years ago, a dinner I didn’t get to go to, but as I understand the result was the decision that, yes, Kecia should run, and we were off. And I had no idea the type of adventure and fun that we would have, but this city is remarkable, and it is remarkable because of you. And I want to say thank you so much to my constituents and my neighbors who have given me this honor and have granted me their trust, and I hope that I have done you well and done you proud.

“I’m not sure what I’m going to do in Pennsylvania on the first and third Mondays at about 5:45 p.m. when I’m trying to rush here to get here, but do know that you will be in my heart, and I’m really glad that we have live streaming so I can keep an eye on you. Please keep my city wonderful and welcoming and warm and thank you very much for this honor.”

Cunningham recently announced she would not be seeking re-election to the City Commission. Her announcement comes two months after she was arrested for driving under the influence by a city police officer. She pleaded guilty to the charge in July, and was sentenced to 12 months probation, a $750 fine and 40 hours of community service.

Brian Smith, the current chairman of the city of Decatur’s Zoning Board of Appeals, has announced he is running for Cunningham’s seat on the City Commission.

Garrett said with the elections coming up this November, it is likely the commissioners would appoint someone to serve the remainder of Cunningham’s term.

“According to our charter, and we’re getting an opinion from the city attorney, the City Commission can appoint someone to complete the term of someone who resigns,” Garrett said.

City Manager Peggy Merriss said commissioners could appoint a new member at their next regular meeting.

“The City Charter is silent on electing a new Mayor Pro Tem. I expect that in order to maintain roles and responsibilities the City Commission will elect a new Mayor Pro Tem at the Sept. 8 meeting. But there is no requirement that they have to do so.”