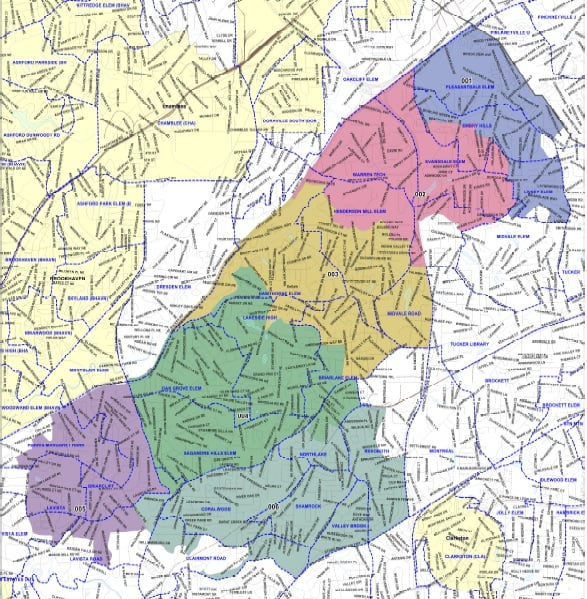 Elected officials with nearly every city in DeKalb County are expected to attend a fundraiser in support of a referendum on creating a new city of LaVista Hills.

The proposed new city will be on the ballot this November, along with a proposed city of Tucker. If approved, the city of LaVista Hills would have a population of more than 65,000 people.

The fundraiser is being hosted by the LaVista Hills Alliance, a group that is separate from LaVista Hills Yes and is focused primarily on raising money for the cityhood initiative.

The fundraiser is being held on Aug. 26 at the The 57th Fighter Group Restaurant 3829 Clairmont Road
Atlanta, GA 30341, beginning at 5 p.m. The suggested minimum donation is $500, and the event is closed to the general public according to Mary Kay Woodworth, who is heading up the LaVista Hills Alliance group.

“This is not a public event, it is a fundraiser,” Woodworth told Decaturish via email. “As you know, invitations to fundraising events normally are sent to perspective contributors as opposed to public-information meetings, which are advertised in various ways but not usually via an invitation. Any contributions that we receive will be reported in a publicly available document.

“We would, of course, welcome your contribution to our effort. There is a great deal to do to inform voters in advance of the November referendum vote, and as an all-volunteer group, we need to raise money to communicate information across the entire footprint of the proposed city, so we appreciate those who are willing to support this endeavor.”

For the record, Decaturish was not invited to this event. We will not be taking an editorial position on any of the upcoming cityhood referendums, local elections, or ballot measures and will not contribute funds to any candidate or cause.

Here is the invitation forwarded to Decaturish:

Invite You to a
Fundraiser Benefiting

The LaVista Hills Alliance
Get Out The Vote Efforts

Checks may be made payable to LaVista Hills Alliance, Inc.
And mailed to:
Attn: Patti Peach, 3452 Essex Avenue, Atlanta, GA 30339

“The cities in DeKalb in particular were invited to participate to indicate support for allowing the residents to have a say in whether or not they want to become a city,” Garrett said. “That’s the extent of the information I know … It’s an event to support their efforts in terms of being able to get the support, to get the people to support having that choice, making that choice.”

Garrett said she would not be paying $500 to attend the event.

“They probably will have different groups and organizations that are paying the fee,” she said. “I am not paying the fee. I’m just going as an elected official supporting the right of the people to make that (decision).”

It’s unclear who will be attending the event aside from the elected officials listed on the invitation. Garrett said she was told “vendors” were invited, but said she didn’t have any additional details.

Floyd said he was asked to invite officials from cities and he obliged.

“They wanted to present their case for helping them fund their program to support it, and they wanted to know if they could get some mayors to speak in support of their program,” he said. “That’s kind of what I did.”

Floyd said he did not have a list of invitees.

“I don’t know,” he said when asked who is on the guest list. “I’ve not been involved in that part of it all.”

Notably, there is no representation from Avondale Estates on the list of elected officials attending the fundraiser. Floyd said he reached out to Avondale Estates Mayor Jonathan Elmore, but didn’t receive a response.

“I think there’s a real sense of frustration,” Millar said. “Unfortunately, county government seems to be more and more polarized now with a new commissioner being elected. It seems to be evolving to a north south battle once more.”