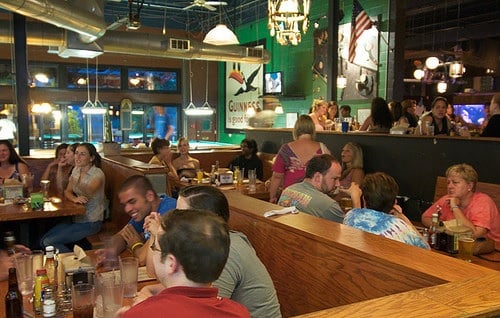 Atlanta Eater sat down with the head brewer of Twain’s Brewpub & Billiards in Decatur.

Chase Medlin discusses honing his craft at Twain’s and the difference between brewing at a brewpub versus a traditional brewery. He also gives details about the current production of beer at Twain’s. You can read the entire interview here.

In other much anticipated Twain’s news, The Comet Pub & Lanes is coming along. The owners of Twain’s purchased the Suburban Lanes Bowling Alley earlier this year. On Wednesday they posted a photo of the demolition. Owner Uri Wurtzel previously told Decaturish The Comet Pub & Lanes will have hand-tossed pizza, craft beers, and a full kitchen and bar. In an update on Facebook, the business said, “We are hoping to be open late 2015, but with all of our construction and the construction around us, we might not be able to open until early 2016.”

In answer to a Facebook question about the bowling leagues, The Comet Pub & Lanes said, “Our first leagues will be short summer leagues in 2016, and then we will do the full leagues in the fall of 2016. We are putting in a brand new scoring system and want to be sure we’ve worked out the kinks before leagues start!”

Brushstroke Sushi Izakaya is set to open at the old Houndstooth Road bike shop at 316 Church Street in downtown Decatur. Atlanta Eater says, “The Japanese restaurant comes from former One Sushi + executive chef and Craft Izakaya sushi chef Jason Liang, whose vision is ‘more inline with the traditions of the Japanese sushi-ya than Atlanta is used to seeing.'”

Atlanta Eater says the sushi restaurant’s projected opening is mid-fall. The blog Foodie Buddha reports Brushstroke will use GrassRoots Farm free-range chicken and “All the pickled vegetables, sauces, and the like will be made on site at Brushstroke.”

Atlanta Eater also mentioned the new Paper Plane concept. The speakeasy is closing its doors, but hinted at a new tropical concept in the same 340 Church Street location.

The team behind Decatur’s Cakes & Ale got a shout-out in the article for Bread & Butterfly, opening in Inman Quarter, a mixed-use development in Inman Park. Bread & Butterfly is described as an “all-day European cafe.”