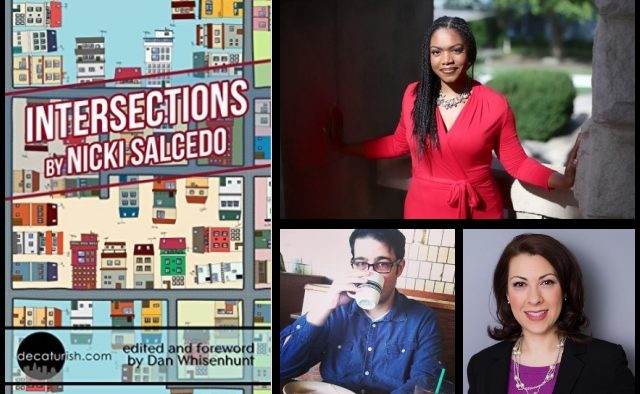 The people behind Decaturish will discuss the book “Intersections,” a collection of Nicki Salcedo’s columns. Salcedo (top), Editor Dan Whisenhunt, and Associate Editor Dena Mellick will talk about writing locally at Georgia Center for the Book this Wednesday.

The voices behind Decaturish.com will be speaking this Wednesday, August 12 about writing locally for Georgia Center for the Book.

Nicki Salcedo, columnist for Decaturish, will talk about her new book “Intersections,” a collection of columns featured weekly on Decaturish. Editor/Publisher Dan Whisenhunt and Associate Editor Dena Mellick will join Salcedo on stage at the Decatur Library Auditorium at 7:15 p.m. to talk about “Intersections” and writing local news.

“I look forward to meeting Nicki’s fans and discussing her work in more depth with our readers,” Whisenhunt said. “I’m proud of the work we do at Decaturish, and Nicki has been a huge part of our success.”

Each week, Salcedo tackles topics — from difficult social issues to the joys and challenges of being a parent of four — from a unique and humorous perspective.

“The Intersections column is very important to me because we as a society spend a great deal of time highlighting differences,” Salcedo said. “The column is a way to show connections. We all have had to deal with loss and frustration, happiness, and weird situations. I believe we are all the same.”

Whisenhunt writes in the foreword of “Intersections,” “whether you ‘get’ Nicki or not, the numbers don’t lie. Her columns are widely-read and shared often. She’s gained a devoted following, including people who might not otherwise read Decaturish. Nicki broadens our reach and provides a voice that’s truly unique.”

“I’ve been attending events at the GCFB for many years,” Salcedo said. “I like that I have access to authors throughout the year. Some of my favorites have been Karen Marie Mooning, Elizabeth Berg, and Mo Willems. There is absolutely something for every reader. It’s a hidden gem in the Atlanta literary community.”

You can hear the Decaturish team and ask them questions this Wednesday, August 12 at 7:15 p.m. at the Decatur Library Auditorium at 215 Sycamore Street in Decatur.