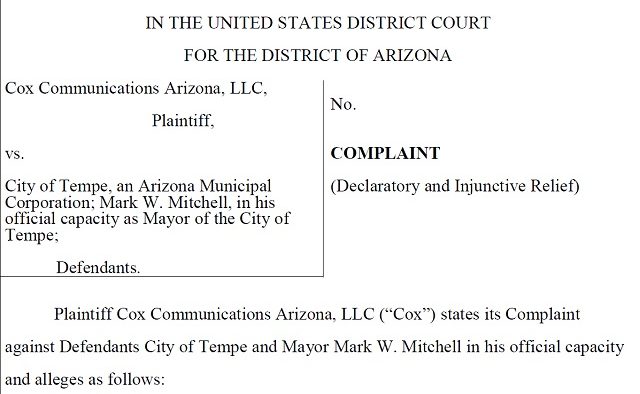 Cox Communications, a subsidiary of the company that owns the Atlanta Journal Constitution, has filed two lawsuits against its competitors in the high-speed internet market.

According to federal court records, the Atlanta-based media company has filed suits against the city of Tempe, Ariz., over regulations the company argues are beneficial to Google Fiber. The company also suing AT&T for patent infringement, accusing the company of marketing services to U-Verse customers that utilize the company’s patent.

Both lawsuits were filed this year. Decaturish has reached out to Cox Communications for a comment, and this story will be updated when the company responds. The lawsuits have been filed as the two companies are pursuing plans to bring gigabit internet to markets around the united states, including Atlanta.

The lawsuit against the city of Tempe claims the city has enacted regulations specifically to benefit Google Fiber high-speed internet.

– U.S. Patent No. 5,999,970, titled “Access system and method for providing interactive access to an information source through a television distribution system”

“The (patents) relate to systems and methods for improving the quality and functionality of interactive television services, as well as enhancing and simplifying the subscribing-user experience,” the lawsuit says.

AT&T has filed a response stating “it denies each and every allegation in the complaint.”

The website Inside Counsel notes that Cox has been involved in a lengthy patent dispute with AT&T. According to the website, AT&T sued Cox for patent infringement in 2014. The article describes the 2015 suit as an attempt to “get AT&T to blink.” To read the full story, click here.

Here are copies of each lawsuit filed in Federal court: