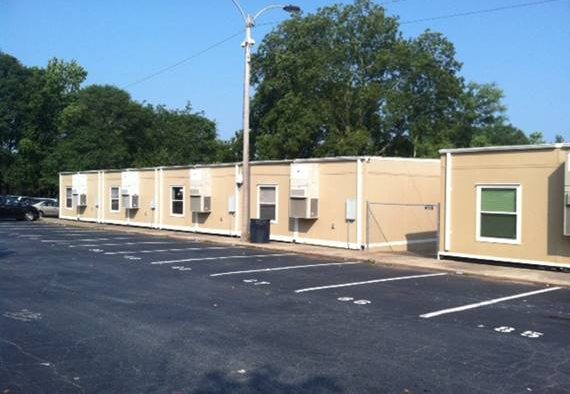 We accept letters to the editor. All letters must be signed and are typically 400 to 800 words in length. We reserve the right to edit letters for length and content. To send your letter to the editor, email it to editor@decaturish.com.

Recently Decatur officials “fired back” a series of rehashed self-justifications for their planning actions previously discussed in decaturish.com’s letter to the editor, “A Brief Latter Day History of Decatur, GA”.

The development planning process was criticized as being fraught with potential difficulties for the citizens and their lifestyle. Citizens’ complaints about the Decatur downtown development have to do with impact on the adjoining neighborhoods, school overcrowding, rampant traffic increase, and inability to significantly participate in the planning process. The city’s “back fires” are summarized in http://atlanta.curbed.com/archives/2015/09/03/decatur-officials-fire-back-chronic-complainers.php).

Public participation in the planning process was not addressed in the City’s return fire and it leads one to speculate on the underlying paradox: the elected officials obviously recognize that the voters were intelligent enough to elect them but seem to believe they are too damn dumb to contribute in any meaningful way to their decision making. The history of Decatur has been that the consequences of imperfect, outdated planning have been reactive rather than preventative through a proactive process involving all parties with a vested interest. After all, the bones of the city’s development plan date back to 1982 although they did tweak it a bit in 2010. Nothing is new in that regard.

The city’s response is unsatisfactory and incomplete. “Chronic complainers” is a bumbled attempt at a dismissive put-down because the appellation is quite suitable as city officials offer much to complain chronically about. So if the shoe fits, wear it. 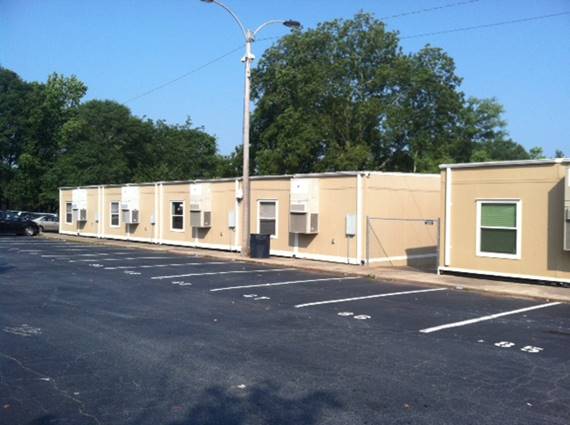 Burgeoning enrollments in the City Schools of Decatur (CSD) are a major sore spot. A stroll down Howard Avenue adjacent to Decatur High School clearly shows the impact of current overcrowding there (Figure 1).

According to city officials, 45 children currently reside in some of the 579 multi-family residences (condos) previously built, although the way the analysis is presented is more than a little shaky.  Supposedly these students contributed to only 2 percent of the historical enrollment increase since the first condo was built in 1999. However, the condo residents as a whole are a markedly older demographic than the target renters for the new apartments. Nonetheless, taking city numbers at face value, this amounts to 7.8 percent percent of the units housing children (assuming 1 child per unit but the actual distribution of children among the individual residences does not affect the final outcome). If the new apartments bring children in the same proportion, then 7.8 percent of the total 621 apartments currently under construction will harbor about 48 children and it’s likely that these apartments will be occupied in 2016. 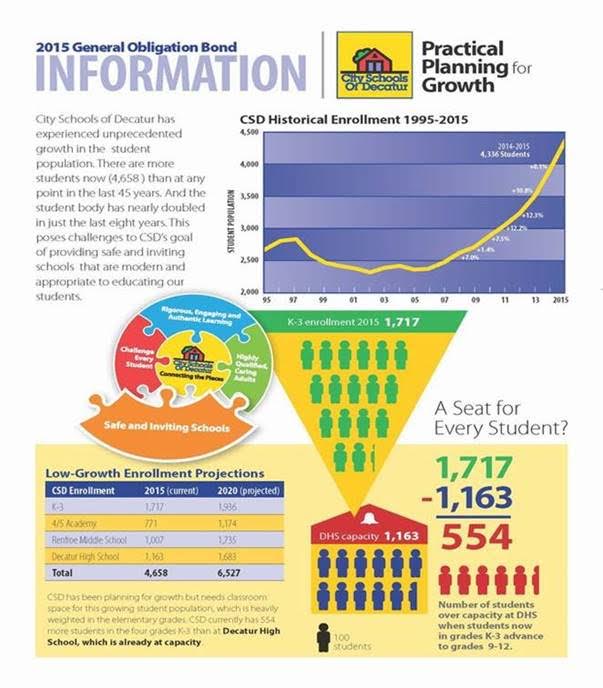 At least one Developer’s stated target market is young professionals. There are also the families that view apartment rent as the better alternative to DeKalb Schools or a more expensive private school – no one has data on this much discussed but unknown element.

It seems apparent to this chronic complainer that young renters’ children will mainly join the early elementary school cohort and thereby contribute to the overcrowding at Decatur High School when they enter grades 9 – 12 (Figure 2).  Thus the projected percentage increase in overcapacity at DHS is 48/554 = 8.7 percent so that when these kiddos get to high school in the 2020 timeframe, the overcapacity will be on the order of 602 students. (This analysis ignores any new students enrolling from the single-family dwellings in the surrounding neighborhoods.)

Admittedly, multi-family tenements yield more tax revenue than single-family homes much to the joy of the city officials but unfortunately it is too late. Figure 2 clearly shows that Decatur High has a problem and the problem is too many students. Will the increased tax revenue resolve the problem?  The numbers are projections, of course, and those incoming children, whatever their number, need to be educated. But it is also clear to any chronic complainer worthy of the sobriquet that the numbers, when contrasted with the protestations and machinations of the city officials, are indicative of the smoke they are blowing at their constituents.

And oh, by the way, as seen in Figure 2, CSD is preparing to float a $75 million bond issue to deal with the student overflow. Guess who gets to pick up the tab on that. Unfortunately, if the voters reject the bond measure when it comes up on November 3, the consequences for CSD and the school children of Decatur will be dire indeed. Whose lack of planning foresight brought about this mess?

We are now left with the remaining subject of traffic congestion. However, let’s defer and wait for all those parking structures associated with the apartments under construction to fill chucky jam full and then watch the fun as the cars attempt to egress onto the Commerce, West Ponce, and Trinity thoroughfares at morning rush hour. The chronic complainers reserve their right to complain.