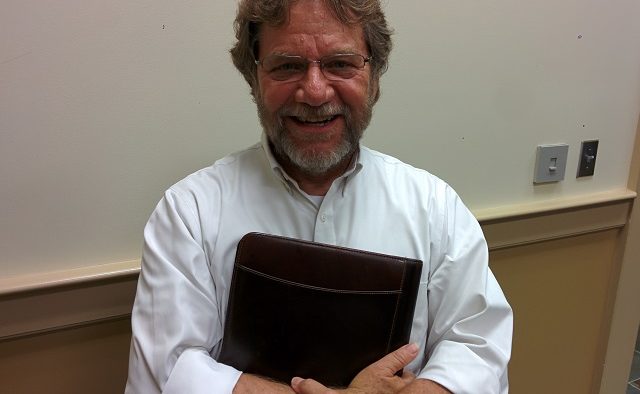 Bill Bolling is sworn in as a City Commissioner on Sept. 21, 2015. Photo by Dan Whisenhunt
Share

Bill Bolling is sworn in as a City Commissioner on Sept. 21, 2015. Photo by Dan Whisenhunt

Bolling is serving the remainder of the term of Kecia Cunningham, who resigned recently to pursue a career opportunity. The election to fill her seat will be Nov. 3. Bolling is not running for the office.

Bolling is the founder and former executive director of the Atlanta Community Food Bank, where he worked for 37 years. His local ties go back decades. He’s lived in Decatur since 1984 and his wife, Haqiqa, is a counselor at Renfroe Middle School. His children attended City Schools of Decatur.

He told commissioners, “I appreciate the opportunity to serve.”

“I owe a lot to Decatur,” Bolling said. “It’s where we’ve raised our two children. We’re one of the few families where the kids walked to school all 12 years. I would hope that anybody who lives in the city who would be asked to say yes to a term like this would say yes.”

In other business, commissioners voted to exempt seniors from sanitation fees and storm water utility fees. The measure is intended as temporary relief for senior citizens who own their homes, live on a fixed income and have seen their property values spike recently. Decatur had sought to expand homestead exemptions for seniors, but that plan died in this year’s legislative session.

City Manager Peggy Merriss said this was one of the few areas where the city could provide relief without going through the legislature or putting it to a public vote. The city’s solid waste fee is $240 per household and storm water is $75 per household, allowing for a total exemption of $315.

Merriss said there are 537 households eligible for the waiver. Senior residents will not have to sign up for the program, she said, because the city already has the information it needs to apply the credit to residents 70 years of age and older. The move will cost the city $170,000 in revenue.

“If the waiver was continued for the first installment payment due June 1, 2016 there would be another $170,000 cost, for a total cost of $340,000 for the current fiscal year,” a memo attached to the city commission agenda says.

Along those same lines, commissioners also endorsed an effort by the city School Board to expand its homestead tax exemption. Currently, residents age 80 and older do not have to pay the school tax.  The school board would like to see the age lowered to 65. The talk about tax rates comes as Decatur voters are being asked to consider allowing the school system to borrow $75 million for construction projects. That could result in taxes going up as much as 8 percent to pay off the debt. Decaturish recently conducted an informal poll that showed respondents were divided on the subject of whether to approve the bond.

Any expansion of the homestead tax exemption would have to go through the state Legislature first. Mayor Jim Baskett commented that the city’s pursuit of expanding it’s homestead tax exemption got tangled up in a chaotic session where legislators debated whether to put two proposed cities – LaVista Hills and Tucker – on the ballot. The Legislature also considered, but declined, to approve the city’s annexation plans.

Baskett said the city still wants to expand the exemption. The city estimated it could provide ‘over $1,100 of annual tax savings” for seniors.

“We absolutely are going to pursue our homestead exemption this fall,” Baskett said. “We got caught up in a very weird set of circumstances last time.”

Commissioners were swayed to act sooner after former mayor Elizabeth Wilson and other seniors made an appeal during a meeting in June. Wilson told City Commissioners that if taxes keep going up she’ll no longer be able to afford to live in the city.