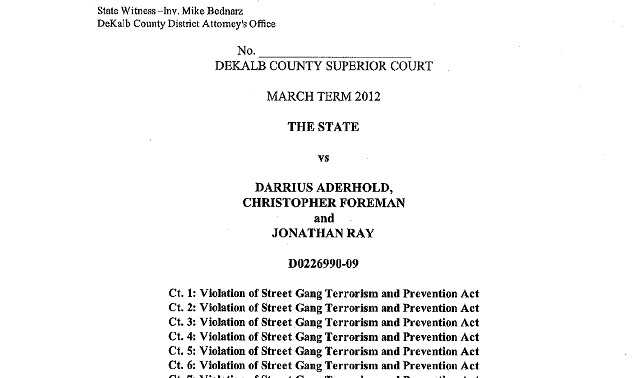 The DeKalb County District Attorney says the last of three defendants has confessed to taking part in a vicious 2012 murder of a man Tucker.

The victim, Robert Ross, was killed because the suspects believed he was gay, the District Attorney’s office said.

According to the prosecutor, the murder was committed as part of a gang initiation ritual. Darrius Aderhold is accused of helping Christopher Foreman and Jonathan Ray murder Ross.

On Friday, Sept. 25, Aderhold was sentenced to life in prison plus 25 years, with the possibility of parole.

“On Jan. 8, 2012, Ross was lured into a local motel room where he was bound and beaten to death by the three men,” the DA’s office says. “According to the indictment, Ross’s skull was fractured and body disfigured by the fatal assault. Aderhold, Foreman and Ray are connected to the Bloods gang and collectively initiated the murder of Ross, who they perceived to be a gay male, to earn membership and increase their status in the gang. Aderhold is expected to take a plea for his role in the murder of Ross. Co-defendants Ray and Foreman previously agreed to plea agreements of life and life plus 15 years respectively.”

The DA initially indicated he would seek the death penalty against the defendants, according to the Atlanta Journal Constitution.

According to the DA, Aderhold apologized to the family of the victim.

“I don’t believe he really meant the apology. You never saw one tear fall,” Ross’ youngest sister Yolanda Ross said in a press release. “After the first hearing, after listening to them describe how my brother was killed, my mother just couldn’t stand to go through it. We are all glad this this is over.”

The DA also provided a copy of the indictment …