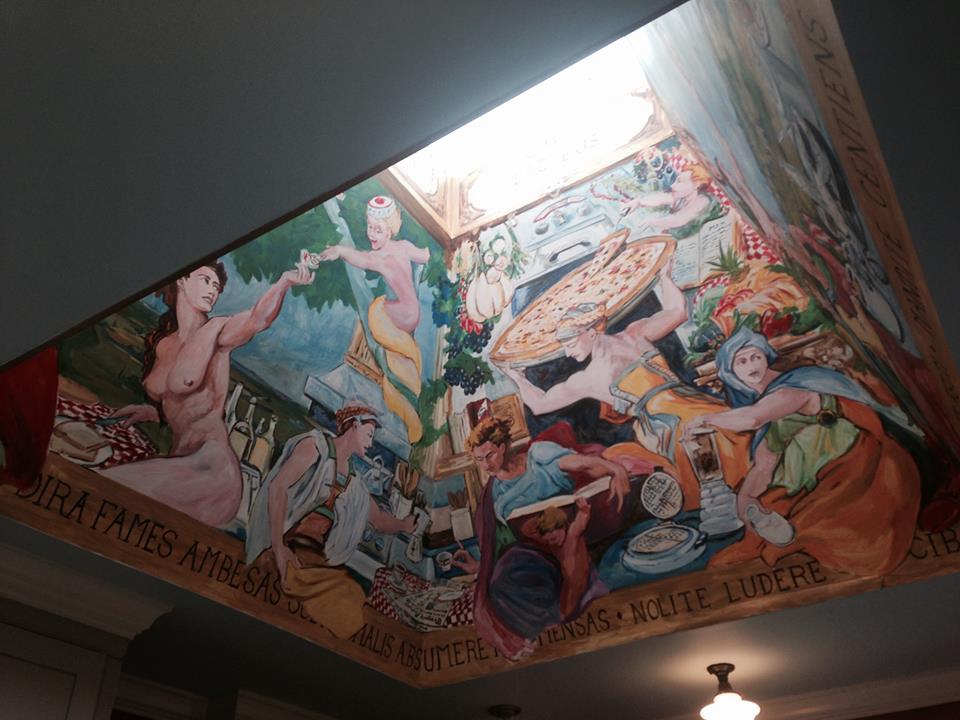 The ceaseless rain couldn’t dampen the passion for historic preservation in Decatur on Saturday.

Members and supporters of the Georgia Trust for Historic Preservation held a Decatur Expedition, which provided a tour of the city’s historical architecture. The Trust holds many such events all around the state as an opportunity for everyone to see new old things.

The day kicked off with a presentation by local historian and former mayor Walt Drake at the Decatur Presbyterian Church, one of the oldest churches in metro Atlanta. In fact, its founding in 1823 makes it older than Atlanta’s oldest, First United Methodist Church.

When the railroad wanted to come to town, residents opposed it. The citizens liked Decatur just as it was, thank you very much. Let Marthasville – later renamed Atlanta – six miles over yonder put up with all that noise and filth. And thus, Terminus, and thence Atlanta was born.

Decatur’s legendary mayor, Scott Candler, didn’t know the meaning of the words “term limits.” He reigned for 19 years, a record that remains unbroken. He was a colorful character and many stories have been recounted by long-time residents.

Those trains that the city of Decatur didn’t want too much of kept stopping in town whenever they felt like it – blocking the roads. People complained to Candler and he complained to the railroad companies – to no avail. So one day, a train was blocking McDonough Street, and he had the Chief of Police yank the engineer off the train and put him in a holding cell until the company paid the fine. After that, the trains didn’t cause too much trouble.

Decatur prides itself on mindful development. The adaptive reuse of historical buildings give it a vibe that is impossible to attain in new construction. Sixteen stops in the tour afforded a glimpse at a wide range of properties – from private homes to civic buildings to green spaces.

The Decatur Expedition was an opportunity to get behind the closed doors of several places that are never or rarely opened to the public. Attendees were grateful for the willingness of the private homeowners and volunteers who gave of their time to make this event possible – especially those who traveled from the four corners of the state.

The story behind the Methodist Children’s Home is touching. It was founded to serve the orphans of the Civil War. The home was sustainable before sustainable was cool, being self-sufficient with their own school, church, and farm, which taught the kids valuable life skills. The chapel is a granite beauty with its crenellated tower and lavish stained glass.

Any attendee of one of Decatur’s many festivals is familiar with the noble architecture of the centerpiece of Courthouse Square. It is constructed of Lithonia granite, with the interior clad in Alabama marble. It now houses the DeKalb Historical Society and a campy Mid-Century Modern display, complete with period music.

Swanton House is one of the oldest remaining structures in Decatur. In 1825, it was a log cabin, but over the course of the century was upgraded to a genteel Georgian cottage. Two antique beds with period bedding made it easy to mentally travel back in time. Out back are another cottage and log cabin with characteristic red clay chinking.

The High House was the most impressive house on the tour with its Victorian jigsaw baluster. When it was built in 1830, Sycamore was a stagecoach route. It was the first two-story home built in Decatur. It has 18 rooms and seven fireplaces, all of which are utilized by the law firm of Williams Teusink. A historic note is that Sherman reportedly watered his horses with the well in the yard.

The Watkins Building has been both grocery and drug store, and even a Woolworth’s. Today it is trendy industrial loft office space for Pogo Pictures, a film and video production service. Plenty of places can boast exposed brick, but their exposed granite block gives their space cachet.

The Avary-Fulton House is two full acres tucked around the corner from East College. Built in 1868, it is the oldest private residence remaining in Decatur. Owners Harriette Fulton and husband Robert Sway were on hand to welcome us, as were their “tenants” son Rob and his bride Lindsey. Lindsey is carrying a sixth generation Fulton descendant. He’ll have plenty of room to stretch his legs once he’s born, with their park-like backyard with an old brick culvert over a spring at the bottom. The Avary-Fulton House is said to be Decatur’s oldest remaining private residence. Photo provided by the Georgia Trust for Historic Preservation

Agnes Scott College has been the setting for more than two dozen films over the past six decades – most notable “The Four Seasons” and “Driving Miss Daisy.” Of course, every co-ed knows about “the Scream Room,” a coveted corner turret room in Agnes Scott Hall that was featured in “Scream 2.” It is the oldest building on campus, and once comprised the entire school. Its Gothic Victorian style is a stand-in for New England’s campuses.

Campbell Hall, the laboratory science building was built in the early 1950s. It is a unique blend of Mid-Century Modern and the Collegiate Gothic that characterizes the campus. The Georgia Trust granted it an Excellence in Sustainable Rehabilitation award, a recognition of commitment to preservation and sustainability.

The Oakhurst Castle was built in 1908 by an art glass salesman. It once boasted a courtyard covered with a stained glass roof. Today the quirky fortress is home to the whimsical Elliott family. Jim and Rachel told tales and showed off the house, garden, and backyard abode, which serves as rec room and attic.

This treasure was nearly reduced to rubble in the early 80’s. If the granite fortress architecture wasn’t eccentric enough, the mural emblazoned on the ceiling in the kitchen is not to be equaled – or believed without seeing. It’s a mashup of classical Italian landscapes and nudes with American commercialism thrown in for grins.

The Crass House was anything but. State Historic Preservation Officer Dr. David Crass has enjoyed his 1957 vintage ranch and filled it with an eclectic mix of antiques and more contemporary objects d’art. The kitchen had already been renovated when he bought it, so he put in some neutral cabinets, but finished the counters off with turquoise Formica to bring it back to the Nifty Fifties. His landscaped yard makes this an eminently livable home yesterday, today, and for centuries to come.

In 2013, Georgia Trust board member David Smith completely renovated his 1954 classic brick ranch home. He filled it with a diverse array of collectibles ranging from all things snake, to tchotchkes of the British royal family and his beloved Corgis. The most unique feature is a geode sink in the hall bath. He is quite the gardener. His back yard is like a botanical garden, with Southern Living-ready-for-their-closeups outdoor rooms around every turn of the garden path, lavish with hydrangeas, Japanese maples, and other shade perennials.

No historical trip down memory lane would be complete without a visit to Decatur’s permanent residents in the metro area’s oldest public cemetery. Names that are seen on buildings and street signs adorn the granite markers of the hills and dales of Decatur Cemetery. Interees include soldiers from every war as far back as the Revolution. Even if you have no loved ones to visit, its quiet byways make it a nice place to run, bike, or stroll.

If you have attended an event at the Frazer Center, you may not have been aware of the Jacqueland Rock Garden beside the neoclassical Atlanta Hospital Hospitality House (a kind of Ronald McDonald House for families with members in area hospitals). It is a verdant refuge for those most in need of it, with a huge reverse well in the middle sending out cascades into a crystal clear pool. Created in 1926, it had fallen into neglect until rescued by Sara Hehir in 2012. This year she received an Excellence in Rehabilitation award from the Georgia Trust.

The day ended with a reception at the elegant Fletcher home, which has the Fernbank Forest behind it and Deepdene Park stretched out in front of it. Deepdene was designed by Olmsted & Sons (of Central Park and Biltmore fame). At 22 acres, it is the largest of the six linear parks they created along Ponce de Leon. In 2012, it also received an Excellence in Rehabilitation award. There is an inviting little trolley shelter that marks the former path of the trolley. A bit of the tracks have been left exposed.