Bill Bolling was appointed to serve the remainder of Kecia Cunningham's term on the city commission. Photo by Dan Whisenhunt
Share 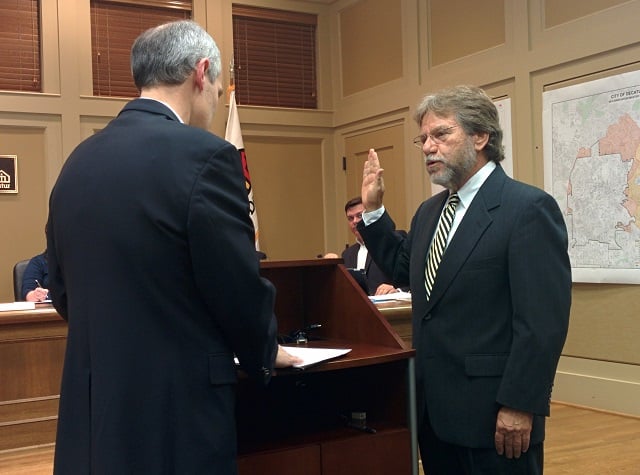 Bill Bolling was appointed to serve the remainder of Kecia Cunningham’s term on the city commission. Photo by Dan Whisenhunt

It’s now occupied by Bill Bolling, the founder and former executive director of the Atlanta Community Food Bank, where he worked for 37 years. His local ties go back decades. He’s lived in Decatur since 1984 and his wife, Haqiqa, is a counselor at Renfroe Middle School. His children attended City Schools of Decatur.

“I’m not coming with any agenda,” Bolling. “One I didn’t plan this myself. It wasn’t a strategy on my part. I think it is a sacrifice of time because I’ve got to get up to speed on some of the specifics. I think Kecia represented us for many years. I hope to carry on her work. You know, I feel very proud and blessed to live in a place like Decatur all these years.”

Since leaving the Food Bank, Bolling has gotten involved with another nonprofit: the Food Well Alliance.

Bolling isn’t running to replace Cunningham, who resigned at the last regular City Commission meeting. The municipal elections are Nov. 3, and two candidates are running for Cunningham’s seat: Brian Smith, the current chairman of the city of Decatur’s Zoning Board of Appeals, and James Johnson, a local attorney.

Commissioners have high praise for Bolling, as do Decaturish readers. As one of our Facebook commenters put it, “In an ideal world, most public offices would be filled by people as caring and committed as Bill.”

The process commissioners used to get to that choice wasn’t immediately apparent. The resignation and filling the vacancy were the first items on the agenda, meaning they weren’t subject to public comments. Commissioner Patti Garrett, who was elected pro tem as well on Tuesday, nominated Bolling. Commissioners didn’t solicit applications for the elected position and it’s unclear if they considered any other candidates.

Bolling said he was approached by Mayor Jim Baskett. “They approached me and asked, if nominated, would I be willing to serve.”

Commissioners didn’t debate the nomination and didn’t discuss why Bolling had been selected. Decaturish asked commissioners to elaborate on their reasons for selecting him. They agreed, while defending the process they used to reach their decision.

Garrett said Bolling met her criteria for filling the vacancy.

“I also welcome you Mr. Bolling and look forward to you serving with us,” she said. “We are fortunate that he will be serving with us. In terms of some of the things that I looked at, we wanted somebody I feel like is a community builder, a bridge-builder. He is a long-time respected member of this community. I think we will benefit from having his expertise.”

Baskett compared the filling of the vacancy to the election of the mayor pro tem or the appointment of judges.

“I don’t think there’s anything unusual about the way we did our appointment,” Baskett said. “We did our due diligence. We did not appear want to manipulate any election now or in the future so we said among ourselves we are not going to appoint anyone to this position who has announced (they are running for office). We didn’t want this to be seen as a stepping stone to anything else and we wanted someone who has shown good judgement, a willingness to serve. We’re only talking about seven meetings. We just wanted somebody who was willing to do this and who could step in and not need seven months to come up to speed on how you make decisions. We found someone who by their life’s work has demonstrated an ability to work as a team and serve other people.”