Today, Sep. 23, is the Autumnal Equinox, also known as the first day of Fall.

According to Timeanddate.com, “On the equinox, night and day are nearly exactly the same length – 12 hours – all over the world. This is the reason it’s called an ‘quinox’, derived from Latin, meaning ‘equal night’. However, even if this is widely accepted, it isn’t entirely true. In reality equinoxes don’t have exactly 12 hours of daylight.”

More importantly, the weather is getting cooler. The high today is 81 and on Thursday it will be 77 degrees. The clocks don’t roll back an hour until Nov. 1, giving us five weeks of lower temperatures with longer daylight hours.

How will you take advantage of the cooler temperatures? Try going for a walk. Contributor Ralph Ellis compiled this list of places to get out and stretch your legs during this fine Fall weather.

The trendiest place to walk in Atlanta, of course, is the Beltline. It’s a great place to see, be seen, walk your dog, skate, bike, view public art and learn about intown neighborhoods.

When your legs get tried, stop for a drink or a bite to eat at spots along the trail, like the Highland Bakery or Pure Taqueria in Inman Park

The still-developing path system will eventually circle the city, using an existing 22-mile rail corridor as a foundation.

The Beltline is open 24 hours a day but it’s probably not a good idea to walk there alone at night. There are numerous places to access the Beltline, like the Inman Park commercial area. There are more than eight miles of hiking trails at the 2,500-acre Davidson-Arabia Mountain Nature Preserve near Lithonia.

The massive exposed granite faces of Arabia Mountain used to be a quarry and remnants of the mining industry remain. Small lakes, wetlands, and patches of forest break up the magnificent scenery.

The hikes are self-guided and the trails can be reached from parking lots on Klondike Road.

If you want to stretch your legs but don’t have much time, consider the Decatur City Cemetery.

Paved roads wind through the historic 54-acre site, by far the largest green space in the city. It’s a favorite spot for dog-walkers and dog poop bag dispensers are available.

Some areas are hilly, so you can get something of a workout. A pamphlet for walking tours is also available. It’s a historic place, too, with graves of Revolutionary War veterans.

It’s all free and open from dawn to dusk. If you’re driving, enter off Church Street. If you’re walking, there’s a pedestrian gate on Commerce, near the little Kroger.

It’s easy to miss this 154-acre nature preserve in the heart of the Emory University campus. It’s open to the public and a favorite spot for joggers.

A wide path, mostly paved, curves around Candler Lake and up the hill past the chancellor’s house. Nature trails cut through the woods. A pedestrian suspension bridge crosses Peachtree Creek and dirt trails run alongside the creek.

The park’s main entrance is at 1463 Clifton Rd NE, on the Emory campus, but the park can be entered by trails next to Starvine Way and behind the school’s Clairmont campus.

If you drive, you may have to pay to park in an Emory parking garage. Lullwater Preserve is open sunrise to sunset.

An easy and scenic spot to walk is Lake Avondale, the centerpiece of Avondale Estates.

Parents with little kids, dog walkers and joggers favor the packed gravel path that circles the lake. You’ll see ducks and turtles, an arched footbridge and a gazebo. If you get tired, take a break on the benches along the path.

The lake is a favorite spot for city events, such as the Easter egg hunt and the Fourth of July fireworks. You can park on the street or the small lot near the lake house at 59 Lakeshore Drive. It’s free and open dawn to dusk.

There’s plenty to do at this busy state park, such as golfing, boating, and enjoying the occasional laser show on the side of this massive granite outcropping. It’s also a favorite spot for walkers and runners, with more than 15 miles of trails.

A wide, paved path circles the base of the mountain and has a sidewalk along the edge. Cyclists often use this route.

The 5-mile Cherokee Trail is partly paved and circles the mountain. It runs along the edge of the lake and hits the outer reaches of the park. The 1.5-mile Muscogee Trail loops through the park. The Nature Garden Trail takes you among shrubs and flowering plants and connects to the Nature Trail

Of course, you can always hike the 1 mile to the top of Stone Mountain for the spectacular view. That trek begins at Confederate Hall.

Parking is $15 per day or $40 for an annual pass. Some attractions require a separate fee. The park is most easily reached off U.S. 78. 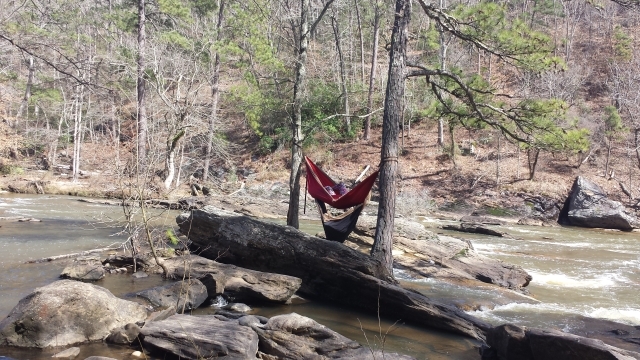 A hiker decided to set up a hammock over Sweetwater Creek in the state park of the same name. Photo by Dena Mellick

Associate editor Dena Mellick recommended adding to the list Sweetwater Creek State Park, just west of Atlanta. This state park is in Lithia Springs in Douglas County and is easily accessible from I-20. Sweetwater Creek State Park offers nine miles of hiking trails, ranging from easy to difficult. Be sure to check out the ruins of a textile mill burned during the Civil War along the creek. In October, a geology hike and a “bark in the park” dog hike are on the calendar.

Parking is $5, and there is a visitor center and gift shop. Additional park events offered include stand-up paddleboarding tours as well as kayaking tours on Sweetwater Creek.