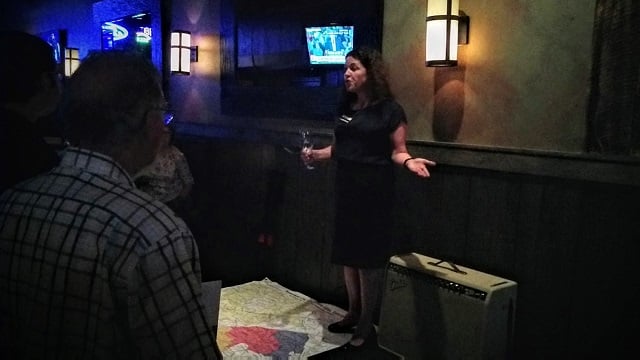 DeKalb Strong, the group leading campaign against creating new cities in DeKalb County held its own fundraiser on Thursday, Sept. 17, at Napoleons Grill on LaVista Road.

One person in attendance, who only identified herself as Sharon, grabbed a “No” yard sign to take home.

“I just can’t think of a good reason to do it,” she said of the cityhood proposals. “I’m not convinced it’s a good idea.”

There are two proposed cities on the ballot Nov. 3. LaVista Hills and Tucker.

LaVista Hills would have over 65,000 people. It would be bordered on the north and west sides by I-85 and bisected by I-285. Tucker would have a population of over 30,000 people. Its western border would be I-285 and its southern boundary would be portions of Stone Mountain Freeway and East Ponce de Leon Avenue.

The LaVista Hills proposal has been the more contentious of the two, and has received much of DeKalb Strong’s attention.

There were several notable contrasts between the Sept. 17 fundraiser and a recent fundraiser held by supporters of creating a new city of LaVista Hills.

The room wasn’t as quiet as it was on Aug. 26 when the LaVista Hills Alliance gathered in a private room at the 57th Fighter Group Restaurant. At times DeKalb Strong President Marjorie Snook contended with the noise of other restaurant patrons enjoying their meals.

The LaVista Hills fundraiser drew elected officials from nearly every city in DeKalb. The DeKalb Strong fundraiser was lacking in that department. The closest the fundraiser had to a politician was former County Commissioner Gale Walldorff.

About 50 people showed up to the DeKalb Strong event and the suggested minimum donation to the cause was $50. LaVista Hills had them beat on that one, too, holding a fundraiser in a crowded room with a $500 minimum.

There weren’t any potential vendors interested in bidding on city contracts in the room. The event mainly drew people who were fine with living in the county, thanks, and weren’t interested in being a part of any new city. The current state of affairs in DeKalb County, with a government deemed “rotten to the core” by the man county officials hired to investigate it, is one of the main planks in the pro-cityhood movement platform.

DeKalb Strong doesn’t disagree that the county is a mess. It just doesn’t agree that a new city will solve the problems that county government has either created or is unable to fix.

Snook was the only speaker at the Sept. 17 event.

“We believe that this plan … all that ends up leading to is higher taxes, more politicians, more traffic, and fewer police,” Snook said. “Our opponents in this who are advocating to create a city, had a $500 a plate fundraiser (a few) weeks ago for vendors who want to do business with a new city and make money off having a new layer of government. … We do not have the corporate donors, and we cannot promise any kind of government contracts to anybody, but we have the numbers.”

Melissa Montgomery, a DeKalb Strong volunteer, said she’s been anti-cityhood since 2013, when the LaVista Hills plan was comprised of two competing cities: Lakeside and Briarcliff. She said, “DeKalb is OK with me.”

“I choose to live in unincorporated DeKalb County because I didn’t want to pay city taxes,” she said.

“I’ve just come down to the conclusion that this is a bad idea,” he said, adding that residents should, “Fix the government we have in place.”

Angela Trosclair, who lives in the proposed city of Tucker, said there’s plenty of opposition to that idea, too.