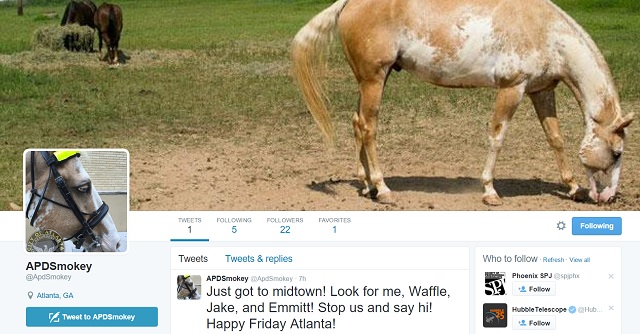 The Atlanta Police Department has created a Twitter account for Smokey, a horse in the Mounted Patrol Unit.

The Department announced the new account as part of a press release demonstrating how APD has increased its social media presence.

“Citizens are encouraged to follow Smokey (@APDSmokey) and hear from the horse’s mouth about patrolling beats and participating in special details, such as festivals, parades and other community events,” a press release from the Police Department says.

Smokey hasn’t Tweeted much so far, but then again, it’s hard to type using hooves.

Just got to midtown! Look for me, Waffle, Jake, and Emmitt! Stop us and say hi! Happy Friday Atlanta!

APD has also joined Periscope, a live video streaming service that was in the news recently after a Florida woman used it to broadcast herself while driving drunk.

“We want to make sure that our citizens have multiple opportunities to engage with us,” Chief George Turner said in a press release. “Social media is an ideal platform to increase our community outreach and share how Atlanta officers are fighting crime.”