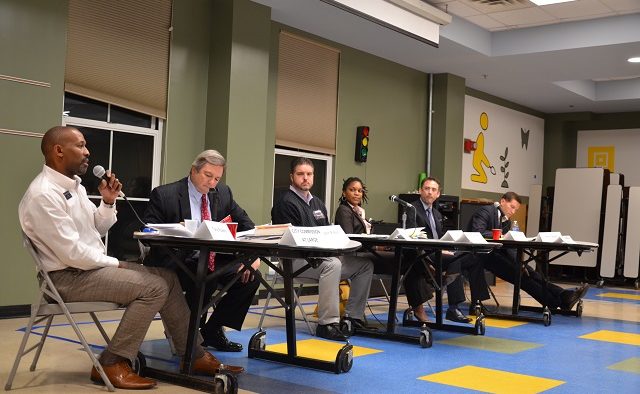 Candidates respond to questions from the audience during a forum at Winnona Park Elementary School Tuesday evening, Oct. 20. Photo by Mariann Martin
Share 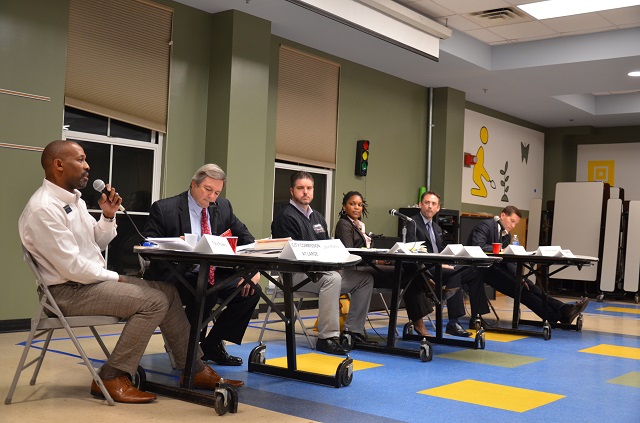 Candidates respond to questions from the audience during a forum at Winnona Park Elementary School Tuesday evening, Oct. 20. Photo by Mariann Martin

Taxes and how the city of Decatur should best use tax revenue dominated much of the conversation at the Winnona Park candidates forum Tuesday evening, hosted by the Winnona Park Neighborhood Association.

The six candidates – two for school board and four for city commissioner – discussed the need for new schools, more green spaces and better connectivity during the forum, but frequently touched on the rising home values leading to higher taxes in the city. The city has attracted a growing population primarily because of the city’s school system, but now crowded schools, expensive homes and lack of diversity bring a new set of concerns.

Johnson drew laughs from the audience when he concluded Decatur residents simply need to be okay with paying taxes.

“If that makes me a tax and spend Democrat, so be it,” he said. “But if you want the city to be awesome, you’re going to pay a lot of taxes.”

The forum began with a discussion of the $75 million bond referendum on the ballot on November 3. Brad Cornett, with the Decatur Citizens for Kids, urged everyone to vote for the referendum.

The school board plans to use the funds to renovate several schools, build a new elementary school and buy land for new schools to accommodate expected enrollment increases. Decatur schools expect to see an increase of about 2,000 students over the next five years, from 4,600 today to 6,500.

“The alternative is trailers,” Cornett warned, estimating it would take about 57 trailers to house the additional students.

The bond would increase property taxes by about 8 percent. However, Cornett noted that planned decreases in the 2016 millage rate means that the rate would remain about the same even if the referendum passes.

“It will basically be a wash,” he said, showing a Powerpoint slide with the planned decrease in the millage rate and the new taxes.

Several members in the audience said they didn’t care that much about how the bond would affect their taxes. If the school system needed the funding, they would support it, they said. Most of the audience seemed to agree, with no questions about the need for the bond.

For more information about the proposed bond, residents can visit www.goyesdecatur.org.

All the candidates said they support the referendum, noting that maintaining Decatur’s schools was a top priority for them.

During the course of the evening, the candidates generally agreed on the need for annexation, diversity and other improvements around the city. Ridley, who is also running for mayor, wants the city to have an elected mayor. None of the other candidates have taken that position. Johnson has positioned himself as an outsider, who does not have the experience in city leadership positions, but says he will bring new ideas and change.

The candidates agreed the city needed to find a way for seniors to pay lower taxes. Johnson recommended requiring developers to set aside a certain amount of their developments for lower income residents, while Ridley said the city should take a closer look at zoning laws to provide more options.

The candidates also agreed the city needs to be more aggressive in increasing green spaces around the city. Powers said he favors an impact fee charged to developers that could then be used to develop green space.

“We have to do it yesterday,” Johnson added. “We need to go out and do it immediately.”

Another audience question asked about how to maintain the city’s diversity. Several candidates noted diversity meant more than race to them.

When asked about rising property values and increased taxes, the candidates noted Decatur was in a unique and difficult position of having about 85-90 percent of their tax digest come from residential housing while only 10-15 percent comes from commercial property.

“We don’t have enough commercial property,” Ridley said. “We have to do annexation for Decatur to survive. It can’t be addressed through redevelopment.”

Smith agreed that taxes were an issue, but said the city should not do anything to diminish outstanding service such as the schools, the police department or the fire department.

DeSimone added that the city of Decatur provides tangible results for the taxes it collects. “And as someone who moved from Long Island, we looked at our tax bill the first year and said, ‘This is great,’” he added, drawing laughs from the audience.