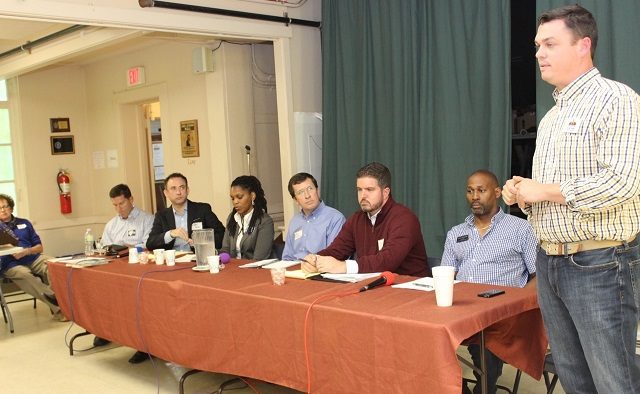 Candidates running for Decatur City Commission and the Decatur School Board spoke during a forum in Oakhurst on Sunday, Oct. 18. Photo by Dyana Bagby
Share 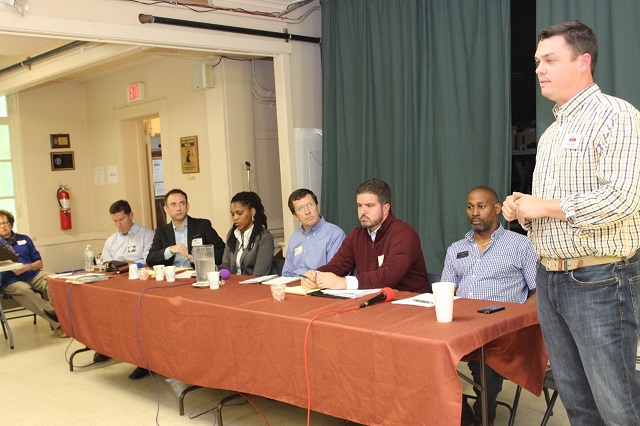 Candidates running for Decatur City Commission and the Decatur School Board spoke during a forum in Oakhurst on Sunday, Oct. 18. Photo by Dyana Bagby

The state of Decatur schools and the need to ensure the city’s diversity dominated a Sunday candidates’ forum at Oakhurst Presbyterian Church.

Rather than a traditional Q&A with candidates, the church’s Race, Ethnicity and Diversity Group organized a “listening forum,” which included a panel of citizens telling the candidates issues they felt needed special attention. Small group breakouts with candidates also allowed citizens to talk directly to those running for office.

Brad Cornett, a panelist representing Decatur Citizens for Kids, advocated on behalf of the General Obligation (G.O.) Bond Referendum. The bond calls for $75 million to be spent by Decatur City Schools on new construction and school expansions. There are approximately 4,600 students enrolled in Decatur schools; by 2020 that number is expected to jump to 6,500, Cornett said.

White, who is up against DeSimone for the CSD District 2 seat, said she strongly favors the referendum, especially because alternatives to not constructing new schools would lead to bandage fixes, such as housing students in trailers.

Money to pay for trailers would come from the operational budget, she explained, which could mean no pay raises for teachers and taxes still going up.

DeSimone said he believes parental engagement is key to ensuring future success of Decatur schools. For example, parents having books in their homes is an indicator of their child’s academic success, he added.

In the city commission race, all candidates acknowledged the need to work with the school board to help maintain the success of city schools. All candidates also said the commission has a crucial role to play in ensuring the richness of diversity in the city of Decatur — diversity of race, religion, socio-economic status, age.

“If I wanted to live in an all-white city, I’d move to East Cobb,” Johnson said.

Johnson said there are concrete steps the commission can take to safeguard Decatur’s diversity, such as mandating developers construct affordable housing along with new expensive apartments. Also, those moving to the city to live in a $900,000 home should pay more in taxes, he said.

Powers, a lifelong Decatur resident, said ensuring seniors are able to age in their homes is a top priority for him. “Let’s be involved. Let’s be active,” he said.

And Drake, who is the only incumbent in Decatur with a contested seat this year, said it is important to remember the Decatur Housing Authority is a separate entity with no direct ties to the commission with DHA receiving federal funds and mandates. However, a working relationship between the two is essential, he said.

Eric Tumperi said he moved to Decatur 27 years ago because of affordable housing. Now he worries working class people and seniors are being booted out of their community by expensive development.

“Many of my friends are concerned for the loss of Decatur, and defining, ‘What is Decatur?’ I want to make sure as we go down the road 10 years from now we have what the city is now. We need to retain the beauty of Decatur, the charm of Decatur, and the equitable tax base,” he said.

The homestead exception for seniors is a great way to start to keep Decatur diverse, said Smith. But diversity continues to be a top concern among citizens who want their children to go to schools with students having a wide range of backgrounds.

“[Diversity] is a community issue,” he said. “We’re in danger of losing that and it’s scary.”

Don Denard, a panelist at the Sunday forum, is a civil rights activist, former school board member and a member of the Leadership Council working on a Better Decatur action plan to address equity and diversity, racially unbiased policing and affordable housing. While Decatur is seeing great development bringing in great amounts of money into the city, now is not the time to forget the city’s progressive roots, he said.

“We don’t want to profit our way out of the richness of diversity we have,” he said.