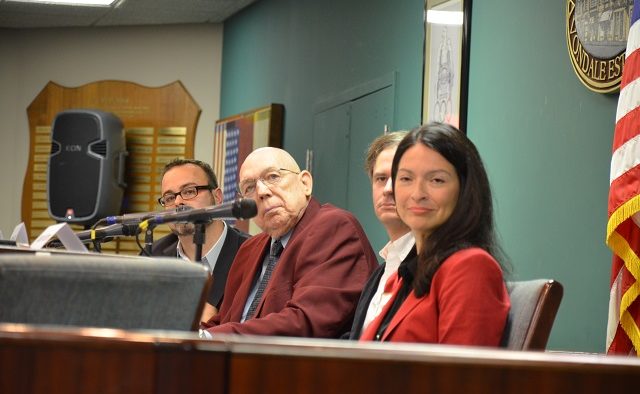 Candidates for Avondale Estates City Commission listen to a question from a resident during an Oct. 13 forum a city hall. Photo by Mariann Martin
Share 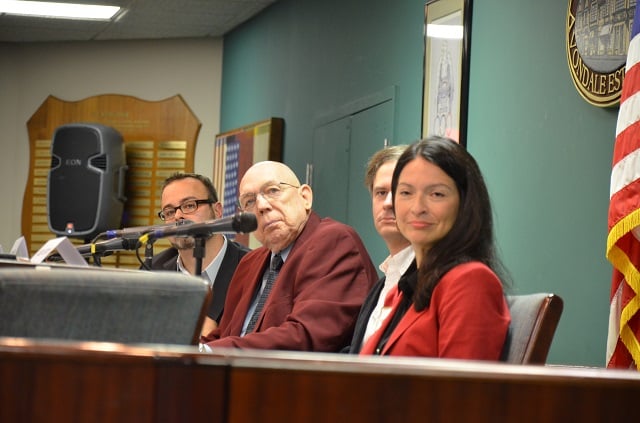 Candidates for Avondale Estates City Commission listen to a question from a resident during an Oct. 13 forum a city hall. Photo by Mariann Martin

Candidates for City Commission agree that developing downtown Avondale Estates by bringing in new businesses and additional green space will be a top priority if they are elected.

The four commission candidates at Tuesday’s forum – Brian Fisher, John Pomberg, Todd Pullen, and Adela Yelton – had similar responses when asked what they would make a priority during their first six months in office. Incumbent City Commissioner John Quinn was on a business trip, but gave an opening statement via phone.

The candidates also fielded questions about education, annexation, walkability and a range of other topics during the 2-hour forum held at city hall. The room was filled with 50 to 75 Avondale residents who kept the questions coming at a steady pace. The two candidates receiving the most votes in the Nov. 3 election will fill seats on the commission.

The small city is known for its tight-knit community and historic architecture, but has not been able enact a cohesive vision for the future. Residents expressed concern about a lack of businesses, green spaces, and the walkability of a city that has a busy thoroughfare between its residential and business areas.

“We have to figure out what city we want to be, how big we want to be and develop in a way that fits Avondale,” Fisher said.

“We need to be clear about what we want,” Yelton added. “We need to make sure the community has its voice heard.”

“We need a more robust DDA, not just with financial resources, but human resources,” Yelton said.

The candidates were asked about how they would handle possible conflicts with Euramex, a developer who plans to create a mixed-use development on 13 acres it owns in the city’s downtown. The developer has not yet provided any details about what the space may look like.

The city should not wait on Euramex, but move ahead with plans to develop the downtown area as a cohesive unit, the candidates agreed. But negotiating the type of development the city wants on property the developer owns could be a complex give and take, they said.

“We can’t be too demanding,” Pomberg said.

While the candidates offered similar positions on downtown development and attracting businesses, they differed more on their viewpoints on annexation.

Yelton and Pullen expressed reservations about annexation if it did not include enough commercial property or bring clear benefits to the city.

“We need to focus on the property we already have,” Yelton said.

Fisher and Pomberg said they supported the city’s annexation plan introduced during the last legislative session and would support a similar plan again. Fisher urged that the city could not wait until the issue came up again but should proactively discuss it and try to decide what to do.

When it came to education, Fisher and Pomberg disagreed over how much city residents could do to improve their options. Pomberg said he felt there was little Avondale residents could to do, since the city’s small size gave it no leverage against the huge DeKalb County school system.

Fisher said education was too an important issue, and the city had to fight to provide the best education for residents.

“We need to start working with the school system and building the right relationships now,” he said.

A question about what to do with the infamous “Erector Set” building at College Avenue and Maple Street drew laughter from the audience. Developer Euramex now owns the building.

“There are a lot of things we could do, but none of them are legal,” Pomberg quipped, drawing more laughs. He said he would see if another developer might be interested in buying the property to develop it.

Fisher and Yelton said they would first discuss demolishing the building with Euramex and see if they would agree. If not, they would look into having it condemned.

Pullen said he would be hesitant to push Euramex too much lest it jeopardize the other plans in the works, but that he would try to have it condemned.

Mayor Jonathan Elmore, who is running unopposed this year, asked the candidates to say something about themselves that defined who they were.

Pomberg described himself a “nuts and bolts” kind of guy.

“I’m approachable, direct and a problem solver,” he said.

Yelton said people who know her will be familiar with three things she tries to do: 1) Always listen. 2) Keep the conversation positive and focus on solutions. 3) Look at what the next steps are and who needs to do them.

“I’m confident, but I care,” Fisher said. “Faith and family are important to me, and I always look for ways that I can serve my community.”

Pullen talked about his creativity and always thinking outside the box in any situation.