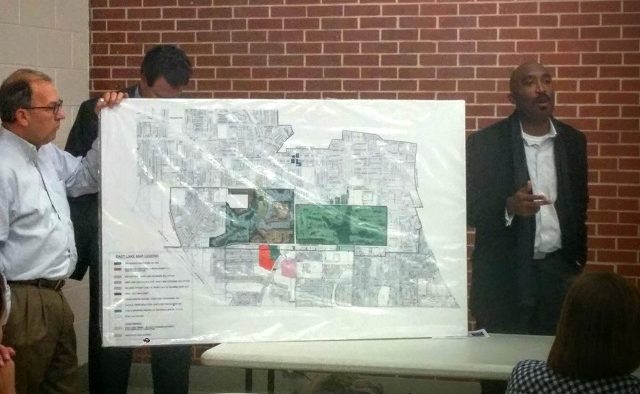 Daniel Shoy, president of the East Lake Foundation, right, and Rick Bent, Vice President of real estate for the CF Foundation, left, hold up a map of an annexation proposal during an Oct. 27 NPU-O meeting. Photo by Dan Whisenhunt
Share 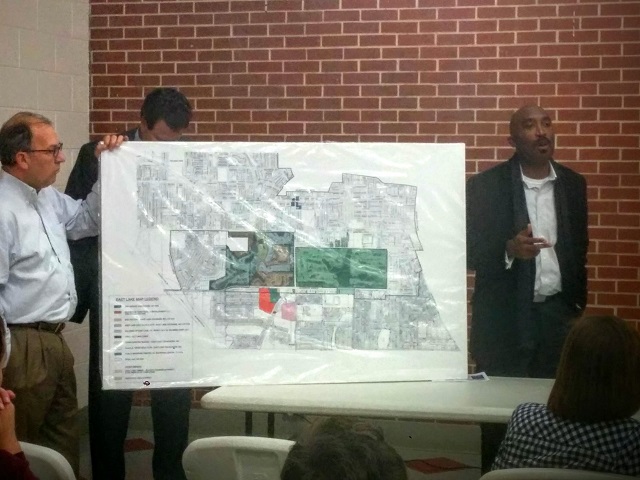 Daniel Shoy, president of the East Lake Foundation, right, and Rick Bent, Vice President of real estate for the CF Foundation, left, hold up a map of an annexation proposal during an Oct. 27 NPU-O meeting. Photo by Dan Whisenhunt

The East Lake Foundation is working to move all of its assets out of the map for a proposed city of Greenhaven and into the city of Atlanta.

Additionally, several homeowners that live adjacent to the East Lake Golf Course are asking for the same thing.

The Neighborhood Planning Unit – O, a citizen input board that weighs in on zoning and planning matters being considered by the city, reviewed the proposals at its Oct. 27 meeting.

Daniel Shoy, president of the East Lake Foundation, said the annexation would move the East Lake Golf Club, the Charlie Yates Golf Course, and a parcel on Glenwood Avenue into the city. Shoy said everything is currently a “hodgepodge” with some of East Lake’s assets in unincorporated DeKalb County and some in Atlanta.

Here is the map of the proposed annexation:

The proposed city of Greenhaven, a south DeKalb City would an estimated population of 300,000, would include everything in DeKalb south of U.S. 78 up to I-285, excluding a proposed city of Stonecrest, and everything south of Memorial Drive on the other side of 285. A proposal to put the city on the Nov. 3 ballot was unsuccessful in this year’s Legislative session, but it could come up again in 2016, particularly if the proposed cities of Tucker and LaVista Hills are successful.

“We don’t want to run the risk of falling into the proposed city of Greenhaven,” Shoy told the NPU.

After the meeting, Shoy said this proposal wasn’t a reaction to the proposed city of Greenhaven and said it has been discussed for some time, but was delayed for various reasons.

He said being in Greenhaven, “Wouldn’t allow us to have all of our resources unified in a way that we want.”

“It wouldn’t allow us to have them all in one unified municipality,” Shoy said. “It’s nothing against the city of Greenhaven. We’re excited about the opportunity to remain a part of DeKalb County, but really the support and resources we can get from the city of Atlanta is the direction we want to go.”

Shoy said the city of Atlanta is welcoming the annexation idea.

“The city has been supportive,” he said. “We’ve had conversations with the city of Atlanta and also with DeKalb County, just to be transparent.”

The homes seeking to be annexed into Atlanta are 511, 517, 522, 525, 529 and 530 Quillian Avenue, on the south side of the golf course. Tracy Gould Sheinin, president of the East Lake Neighbors Community Association attended the meeting. She said it’s not clear if these homes would become part of East Lake if they joined the city.

“One of the scenarios is if a lot of other parcels get annexed in it could create another neighborhood,” she said.